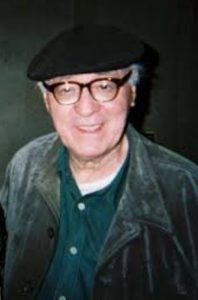 Cid Corman was a fine poet in his own write, but he was also a great and essentially selfless promoter of other poets, not just through his editorship of Origin magazine (founded in 1951), but through his many translations and his quirky, insightful essay on poets and poetry. What’s more, in 1949 Corman co-founded America’s first poetry radio program, This Is Poetry, at WMEX (1510 kc.) in Boston. In more than 150 15-minute presentations, Corman showcased major American poets—such as Archibald MacLeish, Stephen Spender, John Ciardi, Theodore Roethke, and Richard Wilbur, as well as world poets in both the original languages and English translation (Éluard, Lorca, Ungaretti, Benn, and many others).

Many of Cid’s online bios omit This Is Poetry, but a certain poetry afficionado and audiophile by the name or pseudonym of Steel Wagstaff, has made Corman’s voice available to us again by uploading numerous recordings made in 1974 by poet John Levy. These are not This Is Poetry segments, but Corman reading from major American poets—William Carlos Williams, Marianne Moore, Louis Zukofsky, Emily Dickinson—and from several of his own collections. Enjoy!

P.S. There is an excellent selected Cid from Longhouse Publishers—The Next One Thousand Years: Selected Poems of Cid Corman—which I recommended way back in 2008. Don’t pass it up!