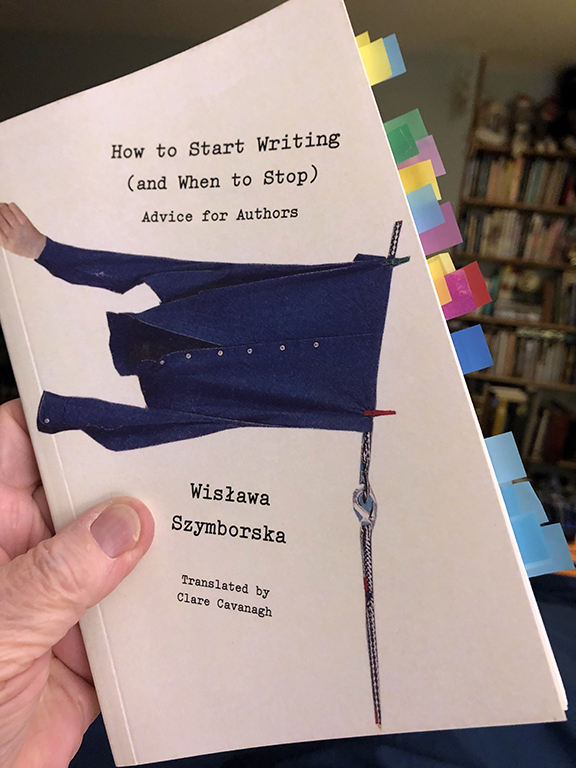 My flagged copy of Wislawa Szymborska’s How to Start Writing (and When to Stop), which I highly recommend.

It was another pandemic year, in some ways more challenging than the first. There was a sense of fraying in the fabric of social life, work life, personal focus (my poetry journal full of fragments that I’m not postmodern enough to throw down on pages and pretend that they cohere as poems), the persistent floating anxiety.

Among the various costumes that relief arrived in were books, of course. In my usual magpie fashion, I wandered across times and genres, applying a habit I acquired in 2019: using little Post-its to flag passages I would otherwise have written in my commonplace notebook, which I started using years ago to break myself of the underlining habit. (Underlining is ok in cheap paperbacks but not in first editions or hardbacks of any kind.) I took the new habit a bit further this year by actually typing the flagged passages into the Excel file I use to keep track of my reading. (Why, oh why? If I were the ever-insightful Pat Dubrava, I would write a relaxed but insightful essay on the question. Maybe 2022 will give me enough focus to produce such a thing!) I had thought to offer up some of those quotes in this post, but then I studied my most heavily flagged book—Wislawa Szymborska’s hilarious and insightful How to Start Writing (and When to Stop): Advice for Authors—and realized what a fool’s errand that would be. All I can do is recommend it for any writer, active or would-be, for its bracing honesty, generosity, and sometimes gentle, sometimes biting humor.

I’ve listed my 2021 readings below, including a couple of re-readings I chose to include as recommendations, in case you missed them in the past or forgot just how wonderful they remain: William Stafford’s A Glass Face in the Rain and An Oregon Message, both unfortunately out of print. I imagine that someone is engaged in assembling Stafford’s complete poems, which (if it ever arrives) will surely rival The Complete Poems of A. R. Ammons (volumes one and two) in scope and depths of pleasure. So count The Complete Poems of William Stafford as a perennial on my wish list!

Before mentioning my favorites from this year, let me note that ISBNs appear in the full book list for those of you who wish to order them. I recommend using Indiebound.org to find a local bookstore to order from, if you don’t already have a favorite local store. And let me add that no book I consider unworthy makes it onto these annual lists! So feel free to fish around.

POETRY: All of Valzhyna Mort‘s collections; Steven Ford Brown‘s subtle translation of Jorge Carrera Andrade‘s Century of the Death of the Rose; Astonishments: Selected Poems of Anna Kamienska brought over into English from the Polish originals by Grażyna Drabik and David Curzon; Amit Majmudar‘s collections and his translation of the Bhagavad-Gita entitled Godsong. Closer to home, there was Carol D. Guerrero-Murphy‘s moving and formally adventurous Bright Path Dark River; Bob Cooperman‘s funny and tender Reefer Madness; Lisa Zimmerman‘s lovely sequence Sainted, in which she gives voice to a variety of female Catholic saints; Beth Paulson‘s Luminous, a gorgeous paean to the threatened but resilient natural world, including our own human nature; and Wayne Miller‘s sobering exploration of the ways in which our private and public lives interpenetrate, We the Jury. Somewhat farther afield but needful of mentioning is One Black Shoe, by Sue Reed Crouse, a book of elegies for her young daughter that simmer like lidded pots of water on a hot stove.

FICTION: For many years I owned the Avon paperback edition of Julio Cortázar‘s novel Hopscotch, which I attempted to read several times, but the small crowded type in the mass market format defeated me. I finally donated it to what was then the annual Jefferson County Libraries book sale. (Sound a note of chargrin here: the book goes for anywhere between $15 and $90 online these days.) Anyway, I happened upon an affordable, somewhat beat-up first edition hardback at The Strand, and I have to say—find a copy of Hopscotch and read it as soon as possible!

Among this years other novels, I highly recommend Ayad Akhtar‘s powerful and often mordantly funny Homeland Elegies. Hemingway‘s posthumous The Garden of Eden was a fine, psychologically spooky surprise. Clarice Lispector‘s The Passion According to G. H. begins with an annoying airlessness, but over the course of the book opens out—or, better, opens in—and becomes a profound, ineffable exploration of spiritual need. Many critics have described the novel as “existentialist,” probably because it bears a superficial resemblance to Sartre‘s Nausea. But it seems to me that Lispector argues against Sartre in favor of a via negativa approach to spirituality—though I have to admit I’ll need to reread the book with that idea in mind to see if it’s real or just a fantasy of my own! I also ventured into James Welch‘s magical but ultimately gut-wrenching historical novel about the tragic encounter between white settlers and the southern Blackfeet tribes of what is now Montana. It is among the most beautful and illuminating novels I read last year.

Finally, I have to admit to reading a book that I first picked up in a paperback edition in a bookstore that no longer exists in Denver’s Larimer Square in the early 1970s. I leafed through, sampling it, and felt a sense of disgust that made me put it back on the shelf. Years later, when I started reading the mid-career novels of Philip Roth, I decided to go back to that book—Portnoy’s Complaint—and give it a try. Although the book is often funny, it is more often an extended misogynistic whine. I’ll continue fishing around in the novels he wrote from Sabbath’s Theater on, thank you very much.

MEMOIR: This year I continued my love affair with Kapka Kassabova‘s writing. Her memoir/travel book To the Lake: A Balkan Journey of War and Peace is a masterful combination of self- and cultural-exploration, a deep dive into personal and historical trauma that leads not to “recovery” but to a complex and quite beautiful embrace of her psychic inheritance. Wow! I finished the year with a memoir I’d meant to read since wrestling with The Last Temptation of Christ as an undergraduate: Nikos Kazantzakis‘s Report to Greco, published posthumously in Greek in 1961 and in English four years later, translated by P. A. Bien. In the introduction, his wife Helen notes that “[t]he Report is a mixture of fact and fiction,” and there are stretches in the book that have the feel of short stories or fables, but the hidden driver is an impetus toward truth as Kazantzakis understood it, so that it struck me as more honest than many another memoir I’ve encountered. Also, I can’t fail to mention A Ghost in the Throat, by the excellent Irish poet Doireann Ní Ghríofa. It’s a lyrical memoir shaped by Ní Ghríofa’s obsessive work on her translation of “Caoineadh Airt Uí Laoghaire” (“Lament for Art O’Leary”) by the eighteenth-century poet Eibhlín Dubh Ní Chronaill. Both the self-portraiture and literary investigation/translation are woven together into a single captivating essay on the fundamental experiences of women, which have changed so little over the centuries.

I’ll close this commentary with two prose books by Henry Miller—books I’d always meant to read but only last year got around to: The Colossus of Maroussi and The Air-Conditioned Nightmare. The former is a flat-out masterpiece, the latter more miscellaneous and hence more uneven. But Miller is probably the most quotable of the authors I read in 2021. Here are a few examples:

These observations are even more striking when we consider that Colossus was first published in 1941, Nightmare in 1945.

Finally, I want to end with a book rivaled only by Szymborska’s How to Start Writing (and When to Stop) for sheer pleasure and resonant charm: Jay Parini‘s Borges and Me. It is (trust me) nothing like any book you’ve ever read touching on the character and presence of Borges. Pure delight!

Onward into 2022 … with Percival Everett’s new novel The Trees on the top of my stack….