A Poem for the First Anniversary of the Insurrection

Browse: Home » A Poem for the First Anniversary of the Insurrection

A Poem for the First Anniversary of the Insurrection 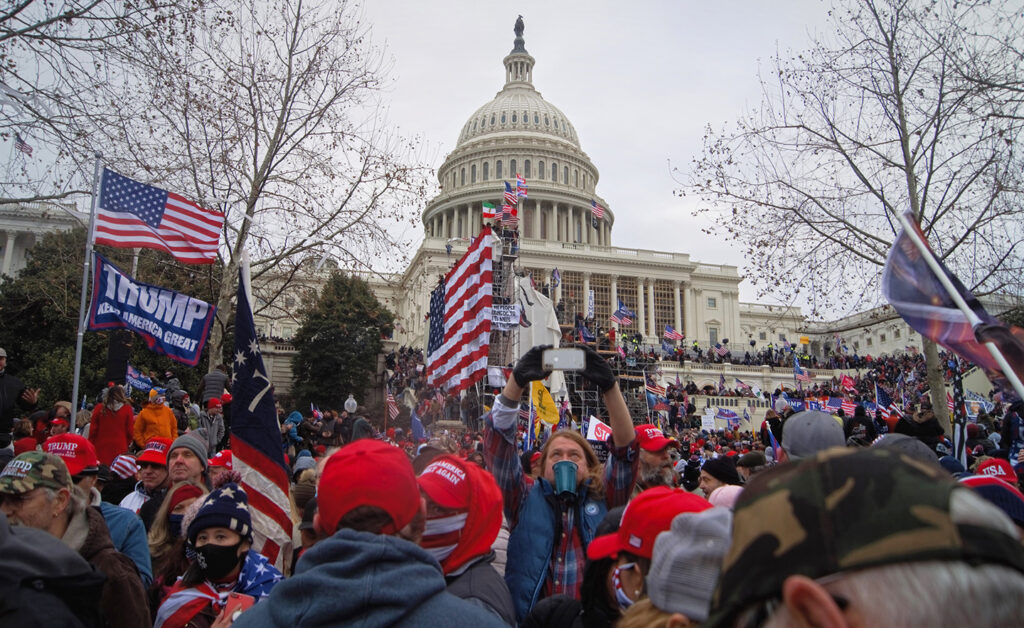 Tyler Merbler from USA, CC BY 2.0 <https://creativecommons.org/licenses/by/2.0>, via Wikimedia Commons

A while back I got tired of worrying about you
now, I’m serious, I long to take care of you.

The Ship of State’s been listing since
Brits torched the old White House.
Who’d think it now, considering
our marble Capitol massive as Giza

or the Taj Mahal. Yet that boatload
of American dreams suddenly seemed
about to keel over when the hordes
scaled its sides one January day,

throngs that from afar had the look
of roaches or slavering flea-bitten rats
itching to render their verminous verdict:
A pox on both your houses! But no—

with the name of their paunchy idol—
the guy who said he’d march with them
but limoed home to sink into a flatscreen
fever dream instead. Fuck the law,

he had to think. Fuck the damned
Constitution. (He’d never read it,
but Tucker said there’s nothing in it
that shackles a stable genius.) Bowing

toward the clamoring crowd, he surely
thought, They’ll win. I’ll win. If not,
let the country go down! Is it true
he unfolded and spread across his lap

a gold-trimmed presidential napkin
to hide the thrill he got from the mob?
(A fake-news barb, maybe. Or a sly nod
to his famous machismo.) In any case,

about four p.m. the Guard rolled in
and kicked some mostly white
insurrectionist ass, and the rioters
scattered like leaves in the wind. But

their idol refused to see it. He raged
and brooded, and before the swearing-in
slunk away to his Florida bunker. He’s
hunkered down there now, phoning

in his rancor to OAN, venturing out
only to sham at dead-ender rallies. And
what about our listing vessel? Awash
in self-dealing and a deluge of lies,

the Ship of State sails on….