A Man with a Slant Rhyme: Contemplating Ted Kooser

A Man with a Slant Rhyme: Contemplating Ted Kooser 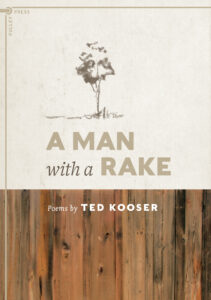 Rhymes, end- or internal-, perfect or slant, are the dovetail joints, or the balls and sockets, of any good poem. When inveterate formalists sniff at “free verse,” which I prefer to call improvisational verse, they ignore the subtle power, the jazz of internal rhyme. Take, for example, the title poem from Ted Kooser’s lovely new chapbook from Pulley Press:

A Man with a Rake

Under his faded, soft, fisherman’s hat
and lifting his face to the early spring sun,
he’s stopped for a moment to rest, up to
his ankles in leaves he’s drawn into
the center of a circle of green. He’s propped
some of his weight on the rake, the end
of its handle locked in a knot of his fingers,
and this pressed to a cheek, his eyes closed.
Before this he’d been watching the rake
tick around clockwise, minute to minute,
a fine afternoon passing forever away,
but he’s figured out now how to slow it
all down, both hands clasped on the end
of the second-hand, holding it back.

One could easily atomize this poem, mining it for examples of canny rhyming. One could point out that it’s shaped like a Petrarchan sonnet, with an octave establishing the “problem” and a sestet providing an “answer” to that problem. (A scholar of sonnets could have a field day with it.)

But what matters to me most is the way the smooth jazz of its rhyming and the rhythms that carry them woo us into sharing the man’s all-too-brief triumph over time. He’s holding back the second-hand, after all, not the minute-hand! As are we all upon reaching the poem’s last phrase, led there by the slant rhymes in the last two lines: “down,” “hands,” “on,” “end,” “second,” “hand”—all leading to “holding it back.” That last phrase’s lack of rhyme hints at the desperation with which the man, the poet, and the reader hang on to that moment of grace. Had Kooser chosen to make this poem a “righteous” sonnet with Petrarchan end rhymes—abba / abba // cde / cde—he would have diminished that desperation. 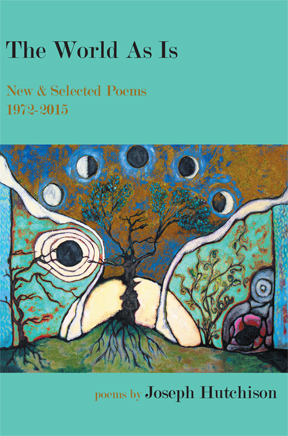 I once published a strictly end-rhymed poem (in The World As Is: New & Selected Poems, 1972-2015) that addressed a theme similar to Kooser’s—maybe the same theme:

but no: the hours like slow
tears fall; the sweet days go;
years flow away—shallow

words whose truth runs deep:
the watch shall never keep
what we want it to keep.

This was as true a poem as I could write on this subject, and the end-rhyming was fun, a perhaps desperate attempt to echo the ticking of the watch. But set beside Kooser’s “Man with a Rake,” it looks awfully weak. This is in part because the “perfect” end-rhymes work like a fence that holds the reader back from the deeper feeling that Kooser’s internal rhyming inspires.

“I hate and I love,” Catullus declared. I would have to add, “I envy.” Not a pretty emotion, but one I often feel as a poet when I read Ted Kooser. But first I enjoy him as a reader. This is why I recommend A Man with a Rake. It’s a small collection of 18 new poems by an American master. Enjoy!