How to Write a New Sentence

Browse: Home » How to Write a New Sentence

How to Write a New Sentence 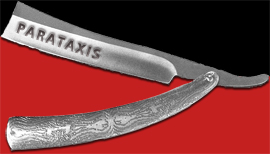 “If the history of the American sentence were a John Ford movie, its second act would conclude with the young Ernest walking into a saloon, finding an etiolated Henry James slumped at the bar in a haze of indecision, and shooting him dead.”

—Adam Haslett, reviewing How to Write a Sentence: And How to Read One, by Stanley Fish

Haslett clearly hasn’t encountered Ron Silliman and so hasn’t factored the New Sentence into his wonderful analogy. Were we to update it (strange to be updating a review posted just yesterday), we’d have to say that the second act would conclude with the young Ron walking into a saloon, finding a florid John O’Hara slumped at the bar in a haze of nostalgia for Lawrence Welk, and slitting his throat with a poorly-honed linguistic theory.