An Anti-Review of Sobbing Superpower: Selected Poems by Tadeusz Różewicz

An Anti-Review of Sobbing Superpower: Selected Poems by Tadeusz Różewicz 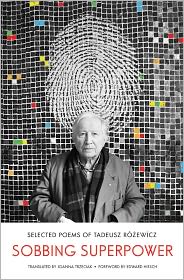 Among my usual Google alerts from The Quarterly Conversation was a review of Sobbing Superpower: Selected Poems by Tadeusz Różewicz. I’ve always found Quarterly Conversation reviews to be intelligent and insightful, and (full disclosure) Różewicz is one of my favorite poets—so I clicked right through to it. Unfortunately, this piece, by one Patrick Kurp, is an exception—that is, it is exceptionally skewed, snotty, and crackpottish.

Kurp begins in a conventional way, with Różewicz’s appearance on Earth; but things take a strange turn soon after:

Tadeusz Różewicz was born in 1921 in Rodomsko, in central Poland, the birthplace in 1867 of the novelist Władysław Stanisław Reymont, the nation’s second Nobel Laureate for Literature. [The first was Henryk Sienkiewicz. —JH] Reymont was proudly provincial, a grade-school dropout and autodidact whose best-known novel is titled The Peasants. In 1999, Różewicz was awarded the Władysław Reymont Prize for his contributions to Polish literature, a fitting alignment. For all his vaunted avant-gardisme, his rejection of poetic form and championing of “anti-poetry,” Różewicz is at heart a provincial, something of a small-town crank, contrary, self-educated, non-aligned, skeptical of most ideologies and fashions, and he has erected a long and much-honored literary career on this anti-literary scaffolding.

We can decoct from this stew of fact and spin a set of poetic values that Kurp seems to feel has been insulted by Różewicz. In Kurp-world, poetry should be written in cities, about urban subjects, by accommodating college-degreed Rotarians who are “aligned” (I’m guessing he means that politically—see below) and pleasantly credulous. We soon discover that Kurp also feels that one should not write too much. “A poet renowned for dismissing the possibility of writing poetry,” Kurp says, “he has remained immensely prolific, like the village scold who won’t be silenced.” Between the lie—Różewicz doesn’t dismiss “the possibility of writing poetry”—and the sneer—”the village scold,” seriously?—falls the shadow.

Next, Kurp notes that the Różewicz volume under review was translated by Joanna Trzeciak, whose versions, he writes, “are clean and uncluttered, and presumably their starkness and transparency reflect Różewicz’s.” Note that “presumably” clause: Kurp knows no Polish (neither do I)—a small point that I’ll return to later.

Kurp goes on to observe that Różewicz, “[a]cross more than six decades […] has consistently written poems about the inadequacy of language, its treachery and the naivetè of those who put their faith in it.” This seems to offend our reviewer, who attributes Różewicz’s stance to “nihilism,” a word he evidently means to invoke the standard dictionary definition, “the belief that life is meaningless.” Why then, demands the baffled Kurp, does Różewicz keep indulging his “chronic logorrhea,” which “is reflected not only in the unstopped profusion of his books—poems, plays, tirades [a more even-handed reviewer might choose the term “essays”]—but in the garrulousness of individual poems.” Kurp interprets this anomaly as a core inconsistency at best, and at worst, a form of bad faith.

He never seems to wonder if the contradiction might be purely (or impurely) ironic. For example, in the poem “avalanche,”which Kurp chooses not to quote, Różewicz states: “one might say that poets / have stoned poetry to death / with words.” It’s neither life nor poetry that the old poet distrusts, but language of a certain kind. His own language—stripped down in diction, syntactically simple, free of ornamental metaphors (what Kurp would call “provincial”)—is grounded in something essential beyond irony. Perhaps he expects his readers to grasp the subtlety of his stance. Evidently, in Poland at least, readers do.

Kurp goes on to contrast Różewicz with two other Polish poets, Zbigniew Herbert and (implicitly) Adam Zagajewski. Unlike these two more sophisticated (read “not provincial”) poets, Różewicz “seems to accept Adorno’s chestnut about no poetry after Auschwitz.” Our sly reviewer doesn’t bother to quote Adorno, and when we examine what Adorno actually wrote, it’s clear why Kurp avoids doing so.

It turns out that Adorno’s famous statement, from his 1949 piece entitled “An Essay on Cultural Criticism and Society,” is too subtle (or obscure) to be a “chestnut”: “The critique of culture is confronted with the last stage in the dialectic of culture and barbarism: to write a poem after Auschwitz is barbaric, and this corrodes even the knowledge of why it has become impossible to write poetry today.” Ironically (that word again), the difficulty of Adorno’s sentence lies its being excerpted from a larger essay—to make matters worse, from the concluding portion of the essay—which begins with this paragraph:

To anyone in the habit of thinking with his ears, the words “cultural criticism” (Kulturkritik) must have an offensive ring, not merely because, like automobiles, they are pieced together from Latin and Greek. The words recall a flagrant contradiction. The cultural critic is not happy with civilization, to which alone he owes his discontent. He speaks as if he represents unadulterated nature or a higher historical stage. Yet he is necessarily of the same essence as that to which he fancies himself superior [italics mine].

It seems to me that Różewicz is keenly aware of this contradiction, whether or not he has read Adorno. (As a “provincial,” he may lack Kurp’s ability or inclination to misrepresent such a well-known writer.) In fact, the poet consistently presents this contradiction as an existential truth. Could he put this more clearly than in his poem “I did espy a marvellous monster,” from They Came to See a Poet, a selection of Różewicz poems translated by Adam Czerniawski. The poem is based on a recollection of sighting of Pablo Picasso “a quarter century ago / precisely at noon / … on Karmelicka Street / in Kraków.” But times are confused: Picasso has died, and his death casts its ironic light over the remembered scene and alters it:

on the way I buy
tea sugar
rolls and smoked sausage

at home a task
awaits me:
To create poetry after Auschwitz

This is hardly the portrait of a nihilist poet. It is also difficult to reconcile the subtlety of the poet’s stance in this poem with Kurp’s characterization of his work as a poetry where “simplicity and sincerity have replaced complexity and linguistic polish,” a poetry that is “indistinguishable from prose except for lineation.” Kurp is in no position to judge this, of course, nor am I; as I mentioned earlier, neither of us speaks Polish—which means that any lack of “linquistic polish” and apparent prosiness could be an effect of translation.

Kurp has other complaints, of course. Różewicz’s poems, he claims, “are literally self-centered, with little or no attempt to create a persona apart from the poet’s own. This is done in the name of authenticity, a principled rejection of poetic artifice….” (Additions to Kurp’s values list: a well-honed persona and an embrace of poetic artifice.) Well, all right. But where’s the rub?

The rub, as it happens, takes center stage in the poem that gives its title to the volume under Kurp’s critical gaze, “Sobbing Superpower,” a poem I know only as “The Weeping Superpower” (in Bill Johnston’s translation*). It is an acerbic, mocking poem about the transition from Bill Clinton’s administration to that of George W. Bush. Kurp finds the title alone “melodramatic, cheaply topical—vulgar**,” adding that “my revulsion intensified as I read the title poem.” I’m willing to stipulate (for the sake of argument) that it’s not one of Różewicz’s finer poems. What I’m not willing to let Kurp get away with is using “Sobbing Superpower” to dismiss “most of Różewicz’s later poems” for being “long-winded and self-indulgent, slack prose made slacker by sophomoric slogans.” Here Kurp’s distaste for the “provincial” Różewicz distorts his judgement, though of course he is entitled to hold an unsupported and (I think) unsupportable opinion.

But what would lead a name-dropping misrepresenter of Adorno to attack one of Poland’s most important post-war poets in such a contemptuous fashion? Can it be that Kurp is a fan of Dubya? (He does, according to the review’s author’s note, live in Dallas.) Can that be why he bristles at Różewicz’s flawed but scathing verses? He accuses the poet of “thinking and writing with the herd, like one of Sam Hamill’s Poets Against War.” So—can the rub be that a satirical attack on our thankfully past-tense war criminal president is perceived by Kurp as an attack on his own politics? Or maybe Kurp is merely a true believer in the Superpower with Good Intentions, launching its freedom-loving drones from the Shining City on the Hill.

Ordinarily I would not interrogate a reviewer’s motives like this, and I may be completely misreading Kurp. But look: in the peroration of his rant, Kurp refers to a translator’s note on “Sobbing Superpower,” observing that she “tells us Różewicz quotes from ‘To John Brown, Citizen,’ a poem by the Polish poet Cyprian Kamil Norwid (1821–83), written in 1859 during Brown’s trial for treason, murder and conspiracy. The echo is revealing. Brown was the Mumia Abu-Jamal of his day—a criminal lionized as a victimized hero. Among Brown’s prominent champions, besides Norwid, were Thoreau, Emerson, and Victor Hugo.” Ponder that. In Kurp’s world, abolitionist John Brown’s misguided assault on Harper’s Ferry, the intent of which was to inspire a slave rebellion, is equivalent to the murder of a police officer by an erstwhile Black Panther for strictly personal reasons. And this far-fetched equivalency somehow indicts Różewicz via Norwid? Does this twisty argument not smack of Glenn Beck’s meandering attacks on Frances Fox Pivens?

Let me step back from that particular morass a moment. Let me consider whether Kurp has not actually made the case for Różewicz. After all, the hysteria underlying Kurp’s argument regarding the Różewicz/Norwid/Brown/Abu-Jamal connection reinforces its absurdity. And he does, after all, pay Różewicz the backhanded compliment of placing him in good company: Thoreau, Emerson, Hugo. Being placed there by an enemy ought to make the old poet smile. And it certainly ought to recommend this new selection of his poems to the rest of us.

____________________
* I’ve indulged my own sense of irony by linking to an infinitely more balanced Quarterly Conversation review of Różewicz’s work.
** Vulgar, from the Latin vulgaris, from vulgus, “common people”—not necessarily “provincials,” but close enough to annoy Mr. Kurp.