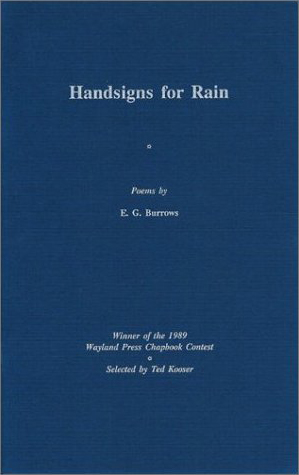 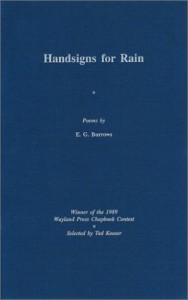 I was saddened by John Latta’s report of the death of E. G. Burrows, whose poems have been quiet but articulate companions for many years now. Our paths crossed (via mail, not in person) back when the small press my friend Gary Schroeder and I operated (Wayland Press) was running an annual chapbook contest. Burrows entered the contest and won in 1989, his manuscript having been chosen by that year’s judge, Ted Kooser. We brought out Handsigns for Rain in short order, and it was frankly among the best works we ever saw into print. I hadn’t heard of Burrows before, but I’m glad he wandered into my life. Here’s a taste of Handsigns:

Up to their knob knees, the strayed
Roosevelt elk wade coast fog and nibble
salt lettuce, five climates and a sea
from their grazed alder and snowline.
Like stranded freighters they bulk
on the tide flats, but their legs
are heron legs, they have thin shadows
and huddle in their bewilderment aground.

T. Roosevelt, my father said,
was born a weakling, exercised, died strong.
I should take, in his image, cold baths,
lift weights, hike alps,
lash horsemen against massed artillery
or at least the odds, those
who bullied and kicked sand in our faces.
I might muscle my way into the presidency,
name elk.

Father, I have failed to learn heartiness
or breathe fire. I am one
of those caricatures with buck teeth
and a shiver of pinched spectacles on a cord.
I failed to do pushups or backbends,
ride rough, live lean,
or gun down horned game in the Serengeti.
Now you are gone like Teddy Roosevelt
and I have never been to Africa,
only to the sea, and the sea keeps coming in.