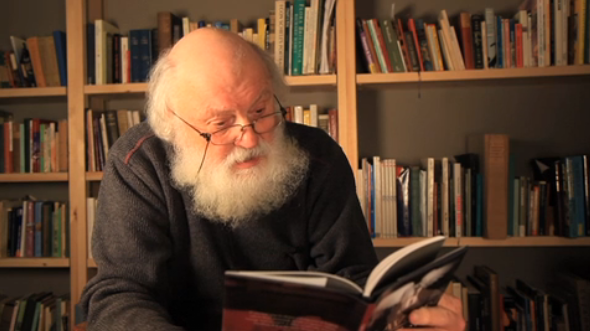 I have struggled over the years, without success, to enjoy Geoffrey Hill’s poetry. Its difficulty is not so defeating as its lack of humor, its deep and finally (for me) corrosive pessimism. Clearly this is a completely subjective response and has nothing to do with the value of Hill’s work, which for others is stratospherically high. But I have to say that this interview with Hill is sending me back to his work, yet again, with a fresh perspective. It is brief but pithy, like his poems, and the politics of it surprised me. Here, for example, is Hill discussing his latest collection, dealing with William Lawes, court musician under Charles I. In it, Hill says, he explores the relationship between art and politics, about which he has this to say:

They [the Caroline court under Charles I] were a tiny, hypersensitive, callous minority existing—displaying their wealth—in a nation that was living obviously barely above subsistence level. I keep going back to that phrase of William Morris’s in a lecture he gave at Oxford in I think 1883 or 1884. He may or may not coin a phrase—I mean he may have got it from somewhere else that I’m not aware of—but he does come up with the phrase “anarchical plutocracy.” And rather say “Yes yes, we are living in a secular age,” I would say we are living in an age of anarchical plutocracy. And I would have said a sense that we are so living does deeply inform everything I write. Because I think that anarchical plutocracy is going to distort everything. And among other things it will distort culture, it will distort language. Everything it touches it will distort.

Sound familiar? Of course it does.

You can watch the under-five-minute interview here.