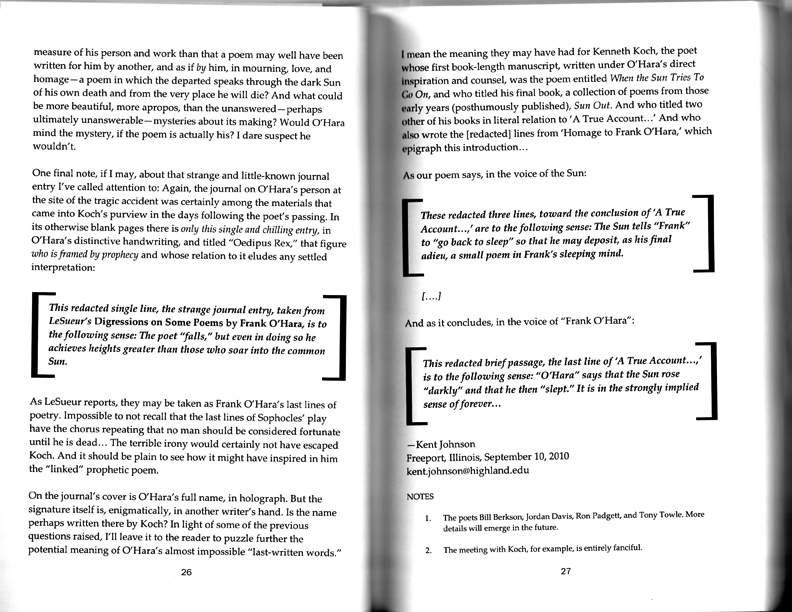 An anonymous commenter replies to my previous post regarding the suppression of Kent Johnson’s A Question Mark Above the Sun: “kent’s “case” is utterly uncorroborated. and kent is known for hoaxes. no one believes that he’s been threatened (for good reason), which is why you don’t see “big guns” commenting on it.”

I admit that I haven’t seen a copy of the letter threatening legal action, which was sent not to Kent but to his publisher, Richard Owens, of Punch Press. Perhaps he will release it. But the publishers and individuals Kent says were mentioned in the letter (Alfred A. Knopf, Maureen Granville-Smith, Bill Berkson, Ron Padgett, Jordan Davis, and Tony Towle) have not denied the letter’s existence. So I feel fairly sure that the letter was sent. It is a fact that the publication was delayed and that many quotations under the control of Knopf were redacted. Here are pages 26 and 27 of the book as published:

Now, Anon’s argument would mean that Richard Owens conspired with Kent to issue a book whose redactions would make unsuitable for reissue in a standard trade edition, which was the stated plan. I don’t know how many copies of the book were printed, but as I recall, I paid $20 for my subscription. I do remember that the book arrived with a separate envelope tucked into the mailer and a letter explaining that the envelope contained a “unique art object” which was “completely independent” of the book. This art object bears images of O’Hara and Koch, which those who sent the threatening letter had barred from use on a book cover. Luckily, the art object was sized and scored to fit neatly onto the book—surely by accident. Having been involved in publishing off and on for years, I can assure Anon that Punch Press very likely lost a good deal of money on this publication. Of course, it could be that the publisher is independently wealthy—a James Laughlin type—who can lose a bit of money, as long as it doesn’t become a habit. But my belief is that the press hoped to at least break even on the effort with a general trade edition—an avenue closed now because of the redactions.

What matters is that the aims embraced by Anon and those who suppressed this book have been accomplished: that is, the preservation of valuable literary properties and the future profits they are expected to produce. Meanwhile, Kent’s freedom of expression has been denied, Punch Press’s freedom to publish and sell has been compromised, and readers like me—who merely want to consider the theory Kent is putting forward—have been inconvenienced and insulted. Kent is right that the denizens and institutions of Professional Verse Culture ought to weigh in. Some of them might even have the courage to respond with their real names attached.