Kent Johnson and the Pros from Dover

Browse: Home » Kent Johnson and the Pros from Dover

Kent Johnson and the Pros from Dover 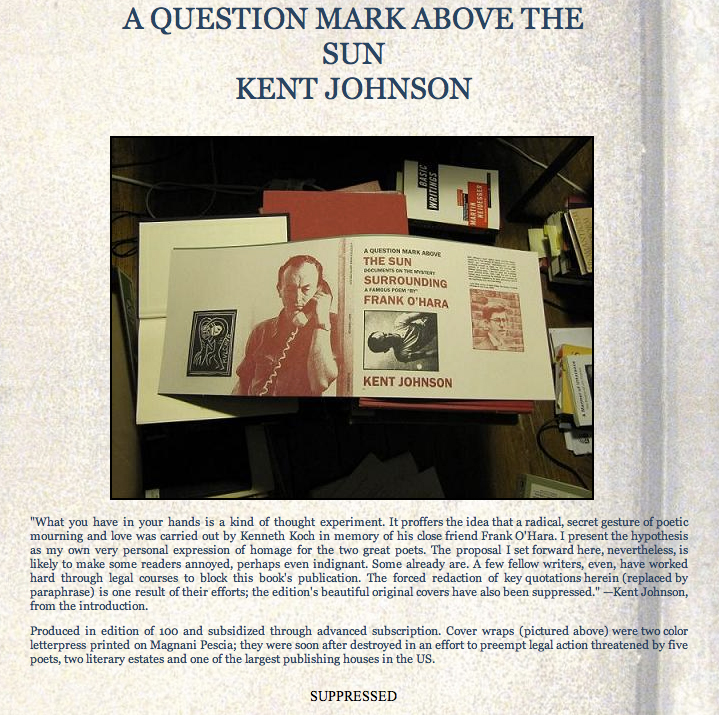 I’ve already posted a number of times about Kent Johnson’s A Question Mark above the Sun: Documents on the Mystery Surrounding a Famous Poem “by” Frank O’Hara (see all my posts dealing with Kent here). I haven’t gotten my act together to write intelligently about his book itself, though I will say—in the way of a news broadcast teaser—that it’s a remarkable book that has been overlooked even by those who have discussed it, because there’s a good deal more to it than the O’Hara-Koch controversy.

That said, I’m posting now because Kent has a really useful exchange with Robert Archambeau on his (Archambeau’s) Samizdat blog. Archambeau’s post is useful in itself, I hasten to add, dealing as it does with “poetry and copyright.” But it’s with just one aspect of that discussion that Kent is concerned: the principle that “under fair use, a critic discussing a published poem or body of poetry may quote freely as justified by the critical purpose; likewise, a commentator may quote to exemplify or illuminate a cultural/historical phenomenon, and a visual artist may incorporate relevant quotations into his or her work.” This principle is articulated in a publication Archambeau supports and played a part in creating, called “Code of Best Practices for Poetry,” which can be found on the Poetry Foundation Web site here. Evidently the Poetry Foundation was involved in creating the guidelines, which is why Kent addresses his comments to both Archambeau and the Foundation.

Anyway, Kent rightly wonders why the big-gun threats directed at he and his publisher Richard Owens, which aimed to suppress publication of A Question Mark Above the Sun, has inspired so little notice from anyone associated with Professional Verse Culture (yes, a tip of the hat to Charles Bernstein’s famous phrase, though Bernstein, as far as I know, has been silent on Kent’s case as well). It’s an interesting example of the Pros articulating principles which they are not willing to speak out on behalf of—sort of like the Obama administration trying to straddle the fence on the rebellion in Egypt: “Mubarak is a great friend, but we support the protestors, although some of them are violent, and we really do worry about whether democracy in Egypt is in our National Interest….” I happen to think that Kent’s book is in the National Poetry Interest, and I echo Kent’s wish to see the Pros from Dover issue a statement of support. Or maybe their silence says exactly what they mean to say….