What Cannot Be Written

Browse: Home » What Cannot Be Written

What Cannot Be Written 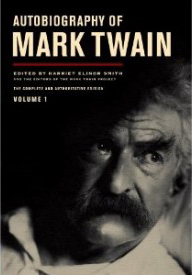 This from the Autobiography of Mark Twain, describing what he calls “the final (and right) plan” for his effort:

What a wee little part of a person’s life are his acts and his words! His real life is led in his head, and is known to none but himself. All day long, and every day, the mill of his brain is grinding, and his thoughts, (which are but the mute articulation of his feelings,) not those other things, are his history. His acts and his words are merely the visible thin crust of his world, with its scattered snow summits and its vacant wastes of water—and they are so trifling a part of his bulk! a mere skin enveloping it. The mass of him is hidden—it and its volcanic fires that toss and boil, and never rest, night nor day. These are his life, and they are not written, and cannot be written. Every day would make a whole book of eighty thousand words—three hundred and sixty-five books a year. Biographies are but the clothes and buttons of the man—the biography of the man himself cannot be written.

Ahead of his time, as ever, not just in his ideas, but in his willingness to cast aside the prescriptive proprieties of the sentence to better capture the movements of his sensibility.

Filed under: and Tagged: Mark Twain