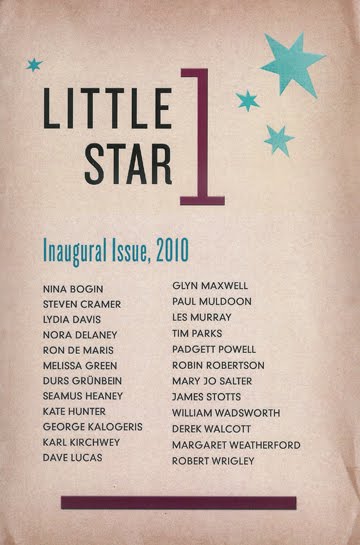 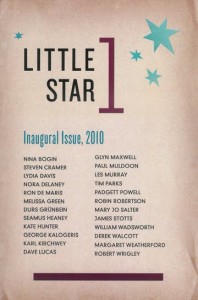 I can’t remember now how I heard about this new lit mag, but I it must have been from a trusted source because I coughed up the subscription fee when I really shouldn’t be subscribing to any more publications, the bedside stack of which sometimes trips me up when I get up in the middle of the night to … well, you know. Anyway, Little Star turns out to be a beautiful magazine, physically in The Paris Review tradition–200 perfect bound, cleanly laid-out pages–but its content is focused primarily on poetry. I’ve read about two-thirds of the Inaugural Issue and have yet to find a poem, in verse or in prose, that didn’t light up the inside of my skull. Best of all, for me as a poet/blogger, is the fact that two Perpetual Birders appear in these pages. One is Andrew Shields, whose translation of a wonderful epistolary poem by Durs Grünbein brought (oddly enough) Cavafy to mind–if Cavafy had ever been interested in the history of the future. The second is James Stotts, whose 16 (count ’em) poems account for 10% of the entire issue, and deservedly so: his music is peculiar and startling, his narratives (for each of James’s poems has a story to tell, though he always tells it slant) are both particular and elusive, and his images are fresh and surprising. I hope he doesn’t mind if I quote one of the poems–among his most direct, I’d say, with an offhand quality and smoky flare at the end that reminds me of O’Hara‘s “The Day Lady Died,” though James’s poem is about as far from elegy as one can get:

on reaching moskovskii station, revisiting the neva on excursion, may of 2006

we used to eat seeds and cake, drink vodka in the theater,
the day ray charles died i was on the streets with you in peter
we went into a record store
was it independence day, or constitution day, remember?
we shared the headphones to hear “what’d i say?” three times over
and watched them raise the bridges on the neva
it was early summer, but raining every day, and windy
night lasted less than an hour, then the dawn came in rose and fire …
that was two years ago now
and pushkin makes me think of you taking your glove off
to answer the phone ringing in your purse
or robert burns

As I said, this poem shows James at his most direct. The others in Little Star range from imagistic to surrealistic, though the latter term might be misleading. James is at heart a realist, even when his imagery is “dreamlike”; it’s just that the inner world seems to him just as real as the outer world, and commerce between them is open at all times.

Little Star, bottom line, is a beautiful piece of work, and its editor Ann Kjellberg deserves kudos and support. The latter, here. Enjoy!