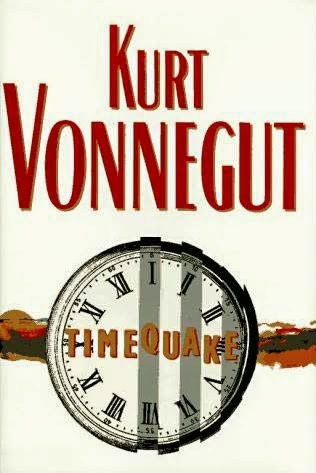 I am finally getting around to reading Kurt Vonnegut’s last novel Timequake, which I have put off reading because it leaves me only one Vonnegut title I haven’t read. I try not to read everything of a writer I love. An unread bit of oeuvre allows me to pretend that the writer hasn’t left us. Anyway, in Chapter 14 of Timequake I came across a statement that explained, in a flash of light, as it were, something that has always puzzled me about Karl Rove.

I mean the fact that Karl Rove never wears a hat. I know how categorical this sounds, and I’m sure some of you will comment with links to pictures of Rove in a fedora or whatever. But my contention is that Rove never wears a hat, except maybe when he’s cavorting in bed at the Mustang Ranch. Most men in Sparks, Nevada wear hats, after all.

I always chalked Rove’s haplessness up to that trait in so many ego maniacs which requires them to flaunt their defects. In Karl’s case, the defect is his bulbous semi-bald noggin. How daunting it must be to face that head in the mirror every morning! I know how daunting it is to face my own, even though my noggin is less bald and bulbous than Karl’s. At any rate, I used to imagine (since I don’t know the man) that he chooses to flaunt this defect by not wearing a hat because he has convinced himself that people see his big head as the outward manifestation of a superior brain. It’s no stretch to imagine that Karl still thinks of phrenology as a science, since he views the Bible as the last word on climate change.*

Kurt Vonnegut, posthumously and therefore accidentally, has presented me with another way to see this issue. I draw attention to it now for all you who have shared my puzzlement over Karl’s hatlessness.

In Chapter 14, page 49 of Timequake, Vonnegut discusses the various meanings that various contexts produce in a phrase frequently used by one of his characters, Kilgore Trout, an out-of-print science fiction writer and Vonnegut’s admitted alter ego. The phrase is one Trout “would have said … to anyone who offered him an empty greeting, such as ‘How’s it goin’?’ or ‘Nice day’….” That phrase is: “Ting-a-ling!”

You can imagine how unnerving it would be to get this response to one of your own empty greetings.

Anyway, Vonnegut goes deeper into the issue, pointing out that Trout uses “Ting-a-ling!” in ways that give it any number of meanings. The meaning of “Ting-a-ling!” that led to my enlightenment regarding Karl Rove is the following:

“If your brains were dynamite, there wouldn’t be enough to blow your hat off.”

Suddenly I realized that Karl flaunts his shiny dome not as a psychological ploy but merely as a way of avoiding mockery. After all, were he to spare us that nauseating sight by wearing a hat, as soon as he’d speak, all of us—even the so-called journalists who pitch vacuous questions to Karl and his ilk on Sunday morning TV—would instantly understand the meaning of his hat. For Karl Rove has never had a thought explosive enough to blow off a nearly weightless seed of milkweed, much less a 140-gram Stetson Imperial.

__________________
* Small wonder that Karl’s middle name is Christian. Let me add that it’s a matter of some personal consternation to admit that Rove was born in my own home town, Denver, Colorado, the same year I was born. I first saw daylight in June, Rove on Christmas day, of 1950.