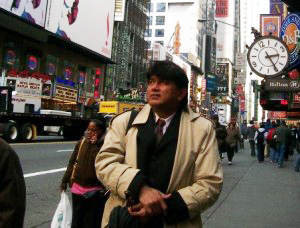 I had the pleasure last night of hearing three poets read at Hearthfire Books in Evergreen: Padma Thornlyre and Laura Paul Watson, both of whom live within shouting distance, and Yuyutsu RD Sharma, who came to us from Nepal. Actually, Sharma has been teaching at NYU and is winding up his stay in the U.S. with a series of readings, the last one taking him back to New York. This wandering route is typical of Sharma’s life: he spends half of each year traveling around the planet, reading and teaching, and half in Nepal, hiking in the Himalayas.

All the readers were engaging. Laura Paul Watson hasn’t published anything that I could find online, but Padma read from a sequence of 50 poems that is due to be published this year. (Here’s one he read last night.) It’s hard to imagine two more different poets: Laura gentle in a Mary Oliverish way, Padma intensely imagistic and archetypal.

Sharma is a third kind of animal. His poems are lyrical, swooping creatures, many of them springing from his experiences as a traveler. The subject matter gives his work an exotic feel—exotic for an urbanized Westerner, at least—and his voracious temperament fills them with colors, textures, place-names, out-leaps into myth and history, kneelings-down into mud and snow. By way of introducing the following poem, Sharma told a story about visiting London. He was in the Temple Tube Station, approaching a rising escalator. The name “Temple” led him to expect a deity up top—and he found one, in a way:

Wind howled
like the trumpet of a fierce Kali
rushed in through
the Temple Tube Station
to slap my face
to smother the flame
of my breath
and blind my vision
as I soared
floating up the steely slope
of the escalators
in spirit of reaching
a hillside shrine
that our goddesses
always prefer to live on.

Once up
out of the Station
in the freezing cold
as I exerted to push
my overcoat up
my shaking frame
I saw her there
on the wet pavement
out alone in the open
with a swollen black eye
and an issue of The Big Issue
held like a trophy,
a sacrificial rooster
against her sagging breast.

—from Space Cake Amsterdam & Other Poems from Europe and America

The juxtaposition of a distant but vital cultural reality with a near-to-hand instance of vitiated secularism is characteristic of Sharma’s ironies—or better, the ironies of a globalized being, of which he himself is an example: he satirizes and celebrates by turns, and often enough does both at the same time. Exhilarating!