The Season of Masks

Browse: Home » The Season of Masks

The Season of Masks 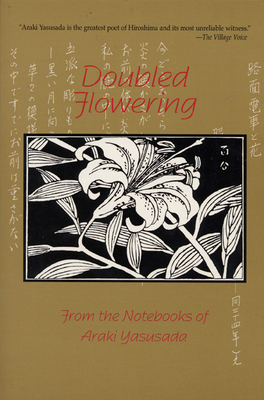 I’ve discussed Kent Johnson’s work on this blog a number of times, but have never dealt with the Japanese poet Araki Yasusada (1907-1972), a survivor of Little Boy’s visit to—or the visiting of Little Boy upon—the city of Hiroshima on August 6, 1945. Yasusada’s writings appeared in American literary journals and chapbooks during the mid-1990s, published as “posthumous” and as “translations.” When the opinion began to take hold that Kent himself was the author of Yasusada’s work, some editors and readers felt hoodwinked by what they considered a “hoax”; others saw instead an immensely inventive avant-garde assault on unexamined literary values. To this day, Kent maintains that Yasusada was, in fact, an invention—the creation of a now-deceased and otherwise unknown Japanese-American author named Tosa Motokiyu; as with Yasusada, many editors and readers believe that Motokiyu is Kent’s creation, adding yet another layer of tantalizing uncertainty to the Yasusada mystery. 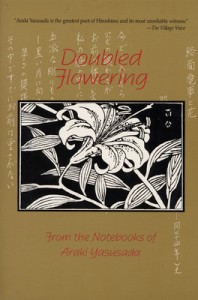 Regardless of how one chooses to receive Yasusada’s work, it’s hard to deny its effects. Here’s an example, drawn from the comprehensive Roof Books collection Doubled Flowering: From the Notebooks of Araki Yasusada:

Fat, he was the butt of jokes,
farting his sake smell in zazen, calling for alms
in sleep. Now his bed’s rolled-up,
like a rare shell, begging bowl inside.

The sarcophagus is slanted upward,
as if traveling at great speed.
“Plenty of solid fuel for this zen-rocket!”,
he’d blurt-out while chiseling, making us howl.
How could he keep forgetting, we marvelled,
that he’d said it before?

Filing by, we now read his last waka, set
deeply in the granite hood:

Why waver over meanings?
Moon silvering all,
absorb the tracks of birds
on this spit of sand.

Sotatsu’s egrets, brittle, hung for the occasion,
soar in emptiness above . . .

So in this newspaper photo they too
seem to want to make us laugh:
Four mariachis at Peace Park,
open-mouthed and looking skyward,
shaking their maracas . . .

[Yasusada was a lay Zennist and became a resident student for a brief period during the early 1960’s. The heading date and last stanza are entered in a different colored ink than the rest of the poem. “Maracas” has also been appended to the title—inscribed above the crossed-out characters for “Tracks.” The poem’s title and waka of the fourth stanza are in Japanese; the rest of the poem is in English. Peak Park is built on the flash-point site of the atomic bomb. Sotatsu was a Zen priest and painter of the late 16th–early 17th centuries. See Javier del Azar’s letter and score on pages 103-108 for more related to this poem.]

I chose this one because it displays most of the qualities that intrigue some and infuriate others: affecting poetry, modernist in its shifts of tone, avant-garde in its manipulations of context and structure, parodic in its scholarly explications, referential in a closed-loop way that links the poem to others parts of the Yasusada corpus—and all this resting on the shaky foundation of English translations of a non-existent author! 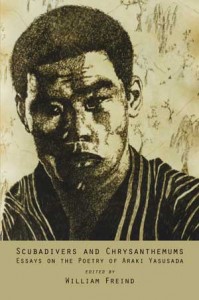 I, for one, find all this endlessly fascinating and—well, why not say it?—illuminating. And so do others, apparently, because Shearsman Books has just announced the forthcoming publication of Scubadivers and Chrysanthemums: Essays on the Poetry of Araki Yasusada, edited by William Freind*. It’s officially on my “buy at the earliest opportunity” list for October—a Halloween self-gift to celebrate the Season of Masks.