Pursuit of the Inexplicable (A Happy New Year Review)

Pursuit of the Inexplicable (A Happy New Year Review) 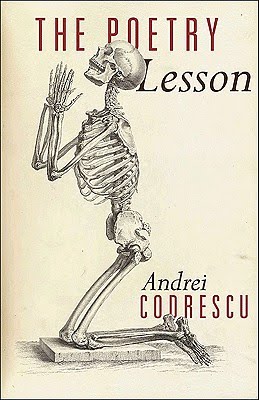 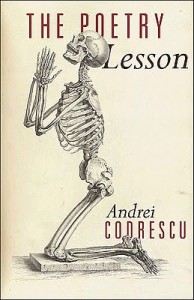 Andrei Codrescu‘s The Poetry Lesson is a wonder worth beginning your new year with. The scene is an unnamed university in New Orleans, though we can be forgiven for thinking it must be Louisiana State University, where Codrescu taught for 25 years and from which he retired in 2009. More specifically, the scene is the first session of the last Introduction to Writing Poetry class the narrator, who is retiring, will ever teach. Melancholy and mercurial hope are built in. The narrator’s weariness, bemusement, wistful sexual impulses, and essential kind-hearted humor flow under and around his pedagogy, which is inventive and peculiar. His main concern is to assign each student a Ghost-Companion from the massive anthology Poems for the Millennium, Volume Two; a G-C is any poet whose last name begins with the same letter as the student’s last name, but the randomness is tempered by the narrator’s efforts to “read” his students and choose appropriate G-C’s for them. Codrescu is no Socrates. He is a post-modern poet-teacher who has aged out of a culture that has dissolved into The Cloud (as in Cloud Computing), where all knowledge is available to be misunderstood by everyone, everywhere. All this makes him feel funny, sad, optimistic, depressed, and horny—occasionally all at the same time.

It should be no surprise that The Poetry Lesson is unclassifiable. Codrescu admits as much. “This story is not a novel or poetry, and it’s no essay or memoir either, though it mimics aspects of both.” This formal insecurity is part of what makes the book so much fun to read.

But the real excitement arrives in the form of character. The teacher is the star of the show, but his thirteen students are luminously sketched one by one as the book goes on. Codrescu’s poet-teacher works with the given (as, let me suggest, all good poets and teachers do). Here’s an example—a scene in which the narrator takes us with him on a restroom break:

I went to the professors’ Men’s Room on the second floor, a place of majestic faience and private stalls where, I imagined, my colleagues held their pus with dignity and let go a flood of professional resentments. There was something solemn and sorrowful about this bathroom forbidden to students. Apartheid still reigned here, keeping the effluvia of professors separate from the discharges of pupils. I pissed smugly on academia, which is a way of saying that I pissed on myself, which I do, regularly, to extinguish my pretensions. While I was peeing I didn’t think I was immortal, but felt something very much like it. It hurts me, it really does, to know so much and to have to invent everything. I could just be a damn professor like all the dinosaurs that spray these stalls, but I can’t. I’d have to give up being a poet, not that anyone knows what the hell that is, but that’s exactly the point. The professors are not afflicted by the identity crisis that is my only subject. They go about in the certainty of their well-cultivated fields and keep adding what they can to the antheap of text before them. My job, I think, is to burn all that came before me—by handing my predecessors to the students to misunderstand, if it comes to that, which it obviously does. There are sixteen million people writing poetry in the United States, and each one has a passing acquaintance with the art. We could be a useful voting bloc if we hadn’t dedicated ourselves solely to the pursuit of the Inexplicable. In other words, if we voted like we lived, not like we wrote. All this who call ourselves “poets” could constitute a movement dedicated to . . . what? Fracturing the complete sentence? Sketching delicate sentiments in Japanese ink on the public mind? Complicating the human psyche to that it might grow new extremities to merge with both animals and microprocessors? Millions of poets out there, splitting hairs, overrefining the world’s languages as if they were crude oil, and here I am, pissing in the faculty room instead of opening a trench into the civic brain and pissing into that! NAB (the New American Brain) and the masses of the unemployed listened in wonder to my raving as I zipped up.

In all my years as a student I had only three teachers who (so I think) sustained inner lives of this caliber. They are among my personal Ghost-Companions, as I imagine Codrescu must be for the hundreds of students who encountered him in the intellectual/meteorological hothouse of New Orleans.