Practicing a Farewell to Camus

Practicing a Farewell to Camus

I have a perhaps odd fiction-reading habit. When I love an author, I hold off reading every last thing the author published. This is especially true for living, lauded authors. The louder the praise, the longer I wait to read the latest book, I supposed because the hoopla can warp the reading experience. This approach works well with living writers.

Since I read far more fiction by dead writers than living ones, though, a slightly different approach kicks in. I read everything except, and the exceptions vary quite a bit. Sometimes it’s the book that clinched the Nobel Prize that I leave untouched; sometimes it’s a minor work that intrigues me but which I deny myself the pleasure of reading because—well, because I will have finished with that writer. And I prefer not to be finished with writers I love. 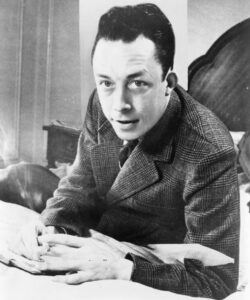 Albert Camus is a writer I love. I’ve read nearly everything, including his fiction (novels and short stories); his lyrical, critical, and philosophical essays; and the articles he wrote for the French resistance publication Combat. Until this weekend I had denied myself only his notebooks and his plays. But this weekend I read his stage adaptation of Dostoevsky’s The Possessed (now out of print). Not having read the novel, I have no sense of how well the play reflects it, and not having seen the play produced, I have no idea how well it plays. There is something Brechtian about its scope and its grounded loftiness, and something tragic in its center-cannot-hold portrayal of the a nation in which spiritual desperation and disillusioned cynicism are gaining ground.

Unfortunately, the play seems as much a reflection of America today as it does of post-WWII Western Europe or 1860s Russia. Let me give just one example, an exchange between a washed up Romantic named Stepan Trofimovich Verkhovensky and his nihilist, would-be-terrorist son Peter:

PETER: Don’t whimper! You are a partriotic, sniveling, whimpering old woman. Besides, all Russia whimpers. Fortunately, we are going to change all that.
STEPAN: Who is “we”?
PETER: Why, we normal men. We are going to remake the world. We are the saviors.
STEPAN: Is it possible that anyone like you aims to offer himself up to men in the place of Christ? But just look at yourself!
PETER: Don’t shout. We shall destroy everything. We shall leave not a stone standing, and then we’ll begin all over again. Then there will be true equality. You preached equality, didn’t you? Well, you shall have it! And I bet that you won’t recognize it.
STEPAN: I shall not recognize it if it looks like you. No, it was not of such things that we used to dream! I don’t understand anything any more. I have given up understanding.
PETER: All that comes from your sick old nerves. You made speeches. We act! What are you complaining about, scatterbrained old man?
STEPAN: How can you be so insensitive?
PETER: I followed your teachings. Accordiing to you, the thing to do was to treat injustice harshly and to be sure of one’s rights, to go ever forward toward the future! Well, that’s where we’re going, and we shall strike hard.   [pp. 67-68]

Is it possible to hear Peter dimwitted raving without thinking, “Wait a minute … where have we heard this before?” Anyone who has spent even five minutes listening to the smug stupidities trotted out by Steve Bannon and his ilk will recognize Peter Verkhovensky. All this character required to take on blood and breath was to be reincarnated in the age of Fox “News,” social media, purple-prose podcasts, and the carnival-barker antics of Alex Jones.

How I wish Camus was alive to help make sense of it all! Since that’s not going to happen, there’s not much left for me but the few Camus miscellanies I haven’t read yet, and a biography or two. It will be like waving farewell at last to a ferryboat from my side of Lethe.

TRANSLATE with x
English
TRANSLATE with
COPY THE URL BELOW
Back
EMBED THE SNIPPET BELOW IN YOUR SITE
Enable collaborative features and customize widget: Bing Webmaster Portal
Back
Filed under: Plays and Tagged: Albert Camus, Alex Jones, Bertolt Brecht, Fyodor Dostoevsky, Steve Bannon