There is no pleasure like a hot-spring bath. Ideally naked we slip into the steam and mineral cooking-egg smell of it, sliding bare buttocks down the slickly gnarled sloping rock until our chin rests on the amber surface of the water. If we pray, we pray to the forces of sacred nature, laughing and arguing as we might across the Thanksgiving table. We are part of their family.

I lied in that first sentence. Reading Stanley Moss is a hot-spring pleasure—an escape into healing intensities, words kneading the aches from intellect, feeling, and spirit. He teaches how to be a coherent self among other selves, an othered self, heroic and vital, yielding only under protest to ravenous time.

I say all this on the basis of reading his Almost Complete Poems. It is monumental (570 pages plus index), humanistic, various and new, old in the ways available only to the truly new. The magnetic north of his poetry is pleasure, its aim being to celebrate the holiness of desire and the desire for wholeness. There is no hot-and-cold, only the healing hot-spring heat that speaks from the depths of the earth. 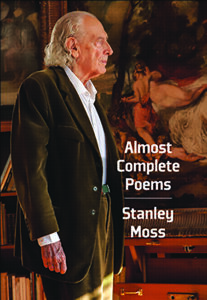 Mirror, mirror on the wall,
who’s that old guy in my room?
In the red nightshirt on my bed
I’m a kabuki extra. If I please
I can marry all
to nothing, snow to maple trees,
leap for joy over my head,
play bride and bridgegroom,
an old and young shadow on the wall.
I can play a decapitated head
laughing in its basket of flies.
There are no clocks in paradise,
a dog’s tail keeps time instead.
(Today be foolish for my sake.)
Which comes last, sunset or sunrise?
Nightfall or daybreak?
The day is Puccini’s,
the street is for madrigals,
the celebration in the cathedral:
a skull beside a loaf of bread,
but for my grandmother’s sake
it’s a portion of torta della nonna I take.
It is a double portion of everything I want.

A mirror is a stage: I’m all the comedies
of my father’s house and one of the tragedies.
I draw my boyhood face
in blood and charcoal
I hold my masks in place—
all the worse for wear
with a little spit behind the ear,
and because this is my birthday
like a donkey in its stall
let fall what may.
To be alive is not everything
but it is a very good beginning.

A week ago my friend, a physician, phoned
to say he has lung cancer, “not much time
so come on over.” I brought him some borscht
I cooked and about a tablespoon of good cheer.
We kissed goodbye as usual.
Then it was as if
we walked out in deep snow.
He was still in bedroom slippers.
March was a long way off, the snow
much too deep for crocuses to push through.
Then it was as if he laughed,
“I lost a slipper. Poor snow.”
I put his bare foot in my woolen hat.
We talked about February and books
as if it were a summer day. I thought,
“No better mirror than an old friend.”
He said, “In my work I’ve done what I wanted to do.”
A branch broke off a sycamore, fell
into the snow for no reason.
The buildings of New York’s skyline seemed empty
of human beings, gigantic glass and steel gravestones.

These words are obsolete.
We had an early summer. He died the ninth of June,
directed toward eternity like a swan in flight,
Katherine and Melissa at either wing.
Surrounded by love, he landed in his garden—ashes now.

The first days of April in the fields—
a congregation of nameless green,
those with delicate faces have come
and the thorn and thistle,
trees in purple bloom,
some lifting broken branches.
After a rain the true believers:
cacti surrounded by yellow flowers,
green harps and solitary scholars.
By late afternoon a nation of flowers: Taioun,
the bitter sexual smell of Israel,
with its Arabic name, the flower red clusters
they call  Blood of the Maccabees,
the lilies of Saint Catherine, cool to touch,
beside a tree named The Killing Father,
with its thin red bark of testimony.
In the sand a face of rusted iron
has two missing eyes.

There are not flowers enough to tell,
over heavy electronic gear
under the Arab-Israeli moon,
the words of those who see in the Dome of the Rock
a footprint of the Prophet’s horse,
or hear the parallel reasoning
of King David’s psalms and harp,
or touch the empty tomb.
It is beyond a wheat field to tell
Christ performed two miracles: first he rose,
and then he convinced many that he rose.
For the roadside cornflower
that is only what it is,
it is too much to answer
why the world is so, or so, or other.
It is beyond the reach
or craft of flowers to name
the plagues visited on Egypt,
or to bloom into saying why
at the Passover table Jews discard
a drop of wine for each plague, not to drink
the full glass of their enemy’s suffering.
It is not enough to be carried off by the wind,
to feed the birds, and honey the bees.

On this bright Easter morning
smelling of Arab bread,
what if God simply changed his mind
and called out into the city,
“Thou shalt not kill,” and, like an angry father,
“I will not say it another time!”
They are praying too much in Jerusalem,
reading and praying beside street fires,
too much holy bread, leavened and unleavened,
the children kick a ball of fire,
play Islamic and Jewish games:
scissors cut paper, paper covers rock, rock breaks scissors.
I catch myself almost praying
for the first time in my life,
to a God I treat like a nettle
on my trouser cuff.
Let rock build houses,
writing cover paper, scissors cut suits.

The wind and sunlight commingle
with the walls of Jerusalem,
are worked and reworked, are lifted up,
have spirit, are written,
while stones I pick up in the field
at random have almost no spirit,
are not written.

Is happiness a red ribbon on a white horse,
or the black Arabian stallion
I saw tethered in the courtyard of the old city?
What a relief to see someone repair
an old frying pan with a hammer,
anvil and charcoal fire, a utensil worth keeping.
God, why not keep us? Make me useful.