I want to celebrate the selection of W. S. Merwin for U.S. Poet Laureate. I encountered him first though his collection The Lice in a contemporary poetry class taught by James Doyle, and it’s still a touchstone book for me. Soon after that I stumbled on his great poem “Lemuel’s Blessing” in Paul Carroll‘s indispensable book The Poem in Its Skin (see below), and I was hooked. Merwin is one of maybe 20 poets I go back to when I get depressed over my own poetry or the poetry I’ve been reading. He is never far from the source, it seems to me, and he always reminds me (as a reader and a writer) what it feels like to touch that source. This selection is also a fine way of reminding everyone that the Poet Laureate is not a marketing position, but an honorary one. Merwin has honored the art in his own poetry and in his practice as a translator, so it’s fitting that we honor that irreplaceable contribution. 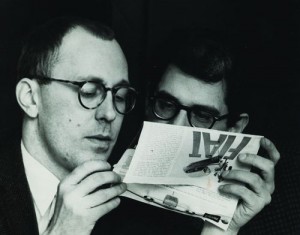 When I mentioned The Poem in Its Skin above I was suddenly aware that most Perpetual Birders will probably never have heard of it. It is essentially a collection of brilliant close readings by Paul Carroll of individual poems–the kind of thing poetry critics seldom bother with anymore, absorbed as they are in poetics, the increasingly arcane history of poetic schools, and the shoring up of declining reputations. Carroll was a poet (the above photo shows him with Allen Ginsberg) who did not seem to worry about such things. The Poem in Its Skin includes essays on Ashbery’s “Leaving the Atocha Station,” Creeley’s “The Wicker Basket,” Isabella Gardner’s “The Widow’s Yard,” Ginsberg’s “Wichita Vortex Sutra,” John Logan’s “A Century Piece for Poor Heine,” Merwin’s “Lemuel’s Blessing,” O’Hara’s “The Day Lady Died,” W. D. Snodgrass’s “April Inventory,” and James Wright’s “As I Step Over a Puddle at the End of Winter, I Think of an Ancient Chinese Governor.” The book concludes with an essay in which Carroll steps back from the individual poems and discusses each of the poets in context of what he calls “the Generation of 1962,” a year related not so much to birth dates as to the appearance of certain seminal collections of poetry. The very arrangement of the volume argues for the primacy of poems over poets, though Carroll doesn’t forget the fact that poets write poems from within the stream of history, and he shows how important that history can be.

Of course, close readings are out of fashion at the moment. I once remarked to a group of poets that I couldn’t find a single compelling poem in Alice Notley’s Selected, and was told that I needed to read all of her work in order to appreciate it. “The power is in the sequence, not in the individual poems.” It’s a way of reading poetry, I suppose, but it seems absurd to suggest that single poems don’t count. Carroll, who wrote some fantastic poems of his own, argues otherwise, and I’d challenge anyone to read The Poem in Its Skin side by side with, oh … let’s say Lyn Hejinian’s The Language of Inquiry, and see which approach honors poetry better. Obviously, my vote has already been cast.