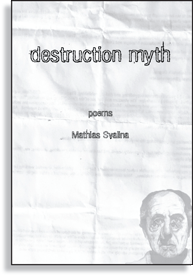 … for some time to review Destruction Myth by Mathias Svalina but haven’t known what to say, or what intelligent I might say (to be more precise), other than noting that Svalina doesn’t sound like other American poets, except maybe flashes here and there of Russell Edson, the somewhat flat voice masking a manic zaniness, as if Steven Wright had thrown over stand-up comedy for poetry, and in fact there are some Edsonesque turns here, and some moments when I can imagine Svalina rubbing his brow the way Wright does in that puzzled and faintly pained way, as if it hurts to be funny, but still I can’t think of any American quite like Svalina, and beyond our shores maybe Zbigniew Herbert with his lapidary parables, though Svalina’s parables are more watery, they move very swiftly, and at their best just when you think you know where the next turn is taking you you find yourself standing at the edge of a rushing river in a wash of moonlight, and there are chunks of ice gleaming or glowing on the opaque current, and you can’t figure out if Spring or Winter is coming on. For example…

There was a four-mile stretch of street
in the middle of the Australian outback,
a street floating in the Indian Ocean.

There was, however, no Department of Transportation
& over the millennia the streets dissolved into cracks & weeds.
Eventually the living things arrived
& grew bigger & smaller
& there were people & the people
invented cars.

When you’re driving a car & you feel the wheel
jerk beneath your hands, it is not the wind
or a pothole./ You’ve driven over the ghost
of an ancient street & your car is crying out
the only way it knows how.

Your car does not love you. Your car knows
what it is to be a car & that cars belong
to the streets. Just as every bird
belongs to the bird feeder. Just as lead
belongs to the pencil. That’s how I felt
when I was eight years old
& my home broke apart.

In the beginning there was a hole in the basement floor. Below the hole there was a computer that had learned how to speak. Unfortunately the computer had not learned the virtues of comfortable, amicable silence between companions. All day long the computer spoke to the hole. Mostly it told the hole about what it was up to, narrating in real time.

Now I am running an application called Probutter, which gives me the semblance of the flavor of real butter.

Now I’m running an application called Real Tears that makes me have the feeling of crying.

Now I am running an application called Automator that allows me to continue talking without having anything to say.

… and no those titles aren’t typos, there are 44 poems and prose poems and fables (the labels won’t stick, my glue must be defective) in Destruction Myth and so, as you might expect (one of few times your expectations will be rewarded by this book), the last poem is “Destruction Myth,” which is simply too excellent to quote, I mean it might spoil your own adventure with Mathias Svalina, who you’ll realize as you read along is standing way over there across the black river, waving to you from the other bank, waving you away or beckoning, or maybe it’s some kind of strange hello, or some kind of curse, not a curse he’s called down on you but one he’s pointing out, as if to say “look where we are,” and both of you wondering how you got here….