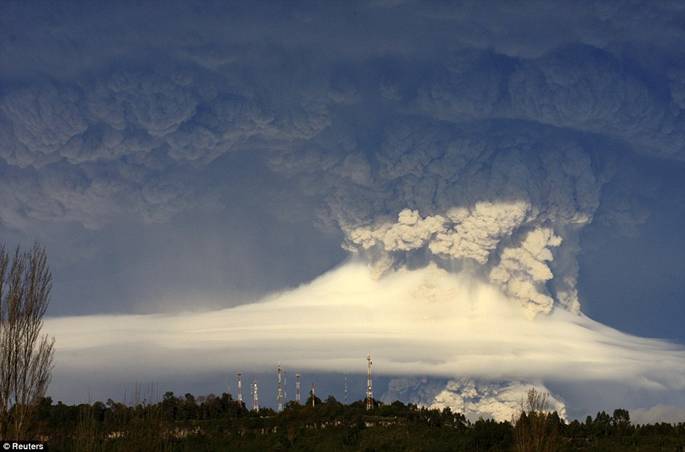 By way of a preface to this volcanic post (text by my friend Bill Logan):

A. A violent order is a disorder; and
B. A great disorder is an order. These
Two things are one. (Pages of illustrations.)

Thousands flee their homes and flights are grounded as Chilean volcano sends plumes of ash showering down.

The Chilean volcano which erupted on Monday has sent a towering plume of ash across South America, forcing thousands from their homes, grounding airline flights in southern Argentina and coating ski resorts with a gritty layer of dust instead of snow.

Booming explosions echoed across the Andes as toxic gases belched up from a three-mile-long fissure in the Puyehue-Cordon Caulle volcanic complex—a ridge between two craters just west of the Chilean-Argentine border that began erupting Saturday.

Winds blew a six-mile high cloud of ash all the way to the Atlantic Ocean and even into southern Buenos Aires province, hundreds of miles to the northeast. 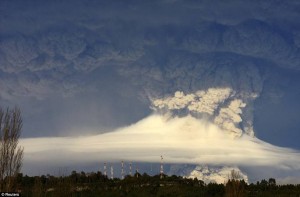 Raining ash: The plume above the Puyehue-Cordon Caulle volcano chain threw ash up to six miles into the sky. 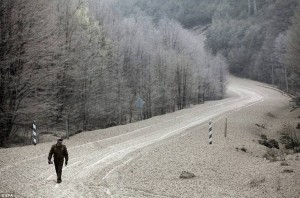 Engulfed in ash: A policeman walks between rocks and ash near the volcano site in southern Chile
Authorities in Chile went house to house, trying to persuade stragglers near the volcano to evacuate because of an increasing danger of toxic gas and flash floods.
Winds fanned the ash toward neighbouring Argentina, darkening the sky in the ski resort city of San Carlos de Bariloche, in the centre of the country, and its airport has also been closed.
The eruption in the Puyehue-Cordon Caulle volcanic chain, about 575 miles south of the capital, Santiago, also prompted authorities to close a busy border crossing into Argentina.
It was not immediately clear which of the chain’s four volcanoes had erupted because of ash cover and weather conditions. The chain last saw a major eruption in 1960. 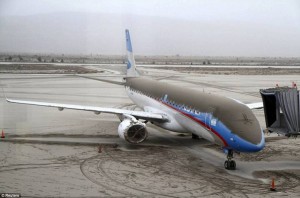 Grounded: An aircraft belonging to Austral with ash on it from Chile’s Puyehue-Cordon Caulle volcano chain remains stranded on the tarmac of the sky resort San Carlos de Bariloche in Argentina’s Patagonia.

Covering: This road near the volcano site was left completely coated in pumice rocks from the Puyehue-Cordon Caulle chain volcano. 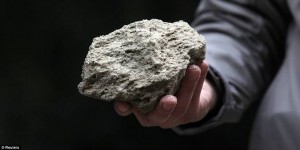 Massive: An example of a pumice rock from Chile’s Puyehue-Cordon Caulle chain volcano is displayed
Local media said the smell of sulphur hung in the air and there was constant seismic activity. “The Cordon Caulle (volcanic range) has entered an eruptive process, with an explosion resulting in a 10-kilometre-high gas column,” the state emergency office ONEMI said.
As a precaution, the government said it was evacuating 3,500 people from the surrounding area.

This development is the latest volcanic activity to affect the country. Three years ago, Chile’s Chaiten volcano erupted spectacularly for the first time in thousands of years, spewing molten rock and a vast cloud of ash that reached the stratosphere and was visible from space.
It also drifted over neighbouring Argentina, coating towns. Chile’s Llaima volcano, one of South America’s most active, also erupted that year and again in 2009.
Chile’s chain of about 2,000 volcanoes is the world’s second largest after Indonesia.  Some 50 to 60 are on record as having erupted, and 500 are potentially active. 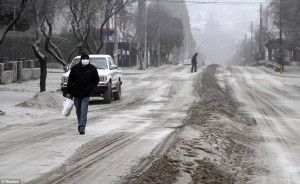 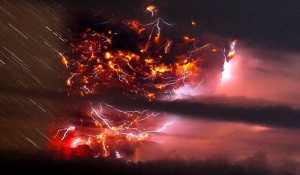 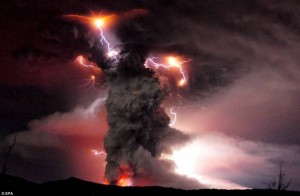 As a precaution, the government said it was evacuating 3,500 people from the surrounding area. 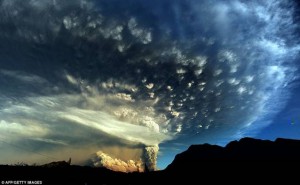 An extraordinary cloud formation is created by the ash rising several miles into the atmosphere.  It was the latest in a series of  volcanic eruptions in Chile in recent years.  Chile’s Chaiten volcano erupted spectacularly in 2008 for the first time in thousands of years, spewing molten rock and a vast cloud of ash that reached the stratosphere.
The ash also swelled a nearby river and ravaged a nearby town of the same name.

The ash cloud from Chaiten coated towns in Argentina and was visible from space.  Chile’s Llaima volcano, one of South America’s most active, erupted in 2008 and 2009.
Chile’s chain of about 2,000 volcanoes is the world’s second largest after Indonesia.  Some 50 to 60 are on record as having erupted, and 500 are potentially active. 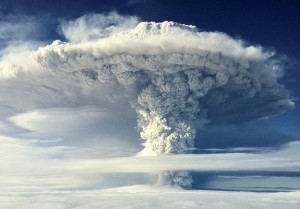 Above cloud level the plume looks like a nuclear bomb has just exploded with its mushroom cloud bursting towards the skies. 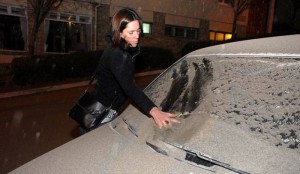 Above and just below: two post-eruption city scenes…. 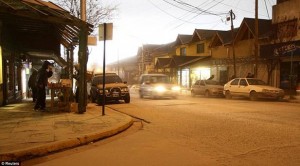 Beautiful but deadly, the cloud turns fiery red in the sunshine as the eruption continues to belch ash skyward. 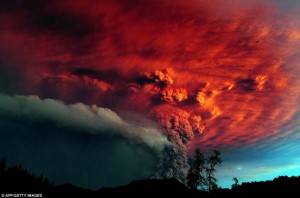 As molten rock and gases are ejected from the core of the volcano below, what appears to be a “have a nice day” face is formed from the electrically charged air. 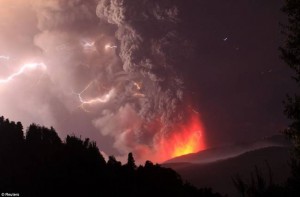 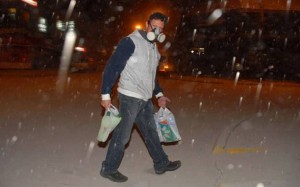 Protection: Carrying bottles of water and soft drinks this man wears a gas mask to avoid breathing in ash. 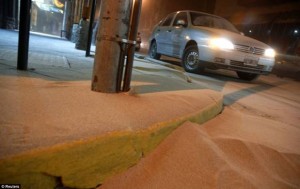 A car drives through a street covered by ash in the Argentine resort city of San Carlos de Bariloche.
It lies 100 miles from Chile’s Puyehue volcano.
Filed under: and Tagged: Bill Logan, Wallace Stevens