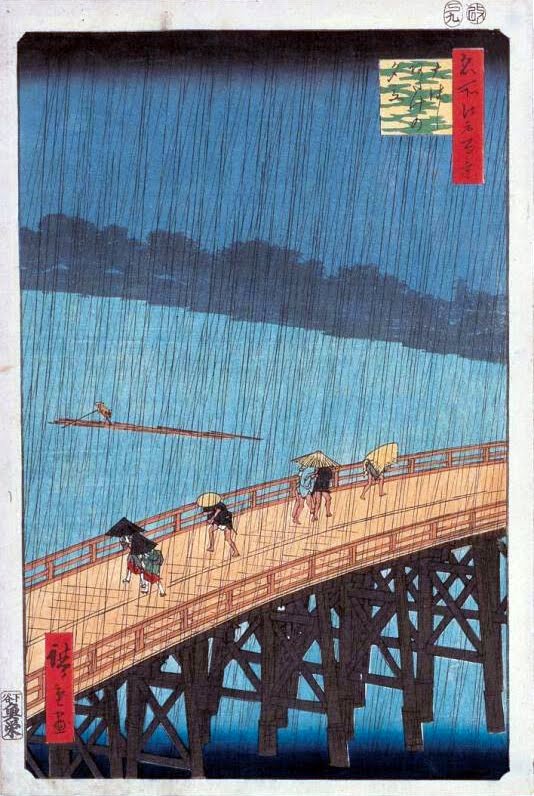 “Poland’s 1996 Nobel Prize-winning poet Wisława Szymborska, whose simple words and playful verse plucked threads of irony and empathy out of life, has died. She was 88. […] The Nobel award committee’s citation called her the ‘Mozart of poetry,’ a woman who mixed the elegance of language with ‘the fury of Beethoven’ and tackled serious subjects with humor.”

Strange planet and strange people on it.
They yield to time, but they don’t want to recognize time.
They have their ways of expressing resistance.
They make pictures such as this:

Nothing in particular at first glance.
One can see water,
one river bank,
a narrow boat strenuously moving upstream.
One can see a bridge over the water
and people on the bridge.
People are clearly picking up the pace,
as rain starts whipping down from a dark cloud.

The point is, nothing happens further.
The cloud changes neither shape nor color.
The rain neither stops nor picks up.
The boat moves without moving.
The people on the bridge run
precisely where they ran before.

It is hard to get by without a commentary:
This is not an innocent picture.
Time was stopped here,
its laws no longer consulted.
It was denied impact on the developing events,
disregarded and dishonored.

Thanks to a rebel,
one Hiroshige Utagawa
(a being who, by the way,
passed away, as is proper, long ago)
time stumbled and fell.

Perhaps it is only a prank without much meaning,
a whim on the scale of just a few galaxies,
but in any case
let’s add what happens next:

Here it is considered in good taste
to hold this painting in high esteem,
to praise it and be greatly moved by it for generations.
For some, even this is not enough.
They hear the patter of rain,
feel the chill of raindrops on necks and shoulders,
they look at the bridge and people
as if they saw themselves there, in that never ending race
along the endless road, to be traveled for eternity
and they have the audacity to believe
that it is real.