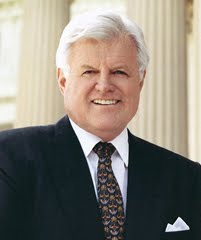 I have to take a moment to lament the passing of Sen. Ted Kennedy. Without him we almost certainly wouldn’t have had the Voting Rights Act of 1965 (segregationist Southern Democrats, ancestors of today’s Blue Dogs, had revolted after the passage of the 1964 Civil Rights Act, and Kennedy worked closely with Republicans to end discrimination against minorities in voting), the Fair Housing Act of 1968, the Meals on Wheels Act (1972), and Title IX (protecting women from discrimination in educational institutions and increasing their opportunities for participating in college sports). And let’s not forget that he was one of 23 senators who opposed the congressional resolution authorizing George Bush’s disastrous invasion of Iraq in 2003—a courageous and prescient stand. It is heartbreaking that he did not live to see his dream of universal health care—a dream shared by 70% of Americans, by the way—realized in his lifetime. Let’s hope this loss isn’t the end of that dream, a final consignment of our aspirations to the unfree market of American corporatocracy. Surely there are some moderate Republicans left, and maybe even some Blue Dogs secretly shamed by their pedigree, who might come together in Ted Kennedy’s memory to give the American people what they so badly need and desire.

More about Ted Kennedy’s record of service here. *NEW*: Here is an excellent extensive profile of Sen. Kennedy published in 2002.