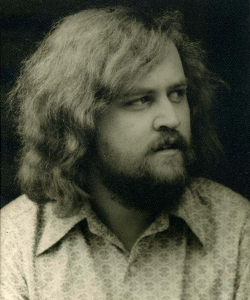 My friend Gary Reilly passed away a few days back. A damn shame on a personal level, of course—he was brilliant, irascible, funny, and what my mother would have called “peculiar” (a word she always applied with affection). We were always glad to see each other, but never had that warm, unconditional type of friendship that Oprah talks about. Gary operated on his own wavelength, a channel you were welcome to tune in to, but he wasn’t about to change his frequency for your convenience.

Gary’s death is a damn shame on another level. He was a writer—a really good writer. In 1978 his first published short story, “The Biography Man,” appeared in The Iowa Review, whose editors nominated it for a Pushcart Prize, which it won; you can find it volume IV (1979-80 edition) of the venerable Pushcart anthology series, along with fiction by Jane Smiley, John Updike, Jayne Anne Phillips, and Manuel Puig. Gary’s story deals with an itinerant vendor of books—autobiographies, that is, written by the salesman’s company and published for the pleasure of one’s family and friends. I won’t say more—track it down and read it!—except to say that Reilly manages to perform a wedding that joins Sherwood Anderson and Jean Stafford* in disturbing matrimony.

Regarding the publication of that story—well, thereby hangs a tale. I’ll relate it here as accurately as my always unreliable memory allows.

Pushcart IV appeared at the end of a thriving period for U.S. literary publishing. The operation—an expensive labor of love, I imagine—was sustained in significant measure by the fundraising abilities of George Plimpton. It was customary at the time for contributors to attend a party at Plimpton’s mansion, which Gary did. Legend has it that Gary was overwhelmed by that fête, and that afterward he froze up. It wasn’t that he stopped writing, but he stopped submitting. I’ve never been sure if he felt his work wasn’t good enough, or if he was dispirited by the declining market for truly literary work that characterized the Reagan-Bush ’80s and Clinton ’90s, or if he feared that some editorial stooge would try to “improve” his writing. (Gary and I never discussed the Gordon Lishing of Raymond Carver, but I often wondered what he thought about it. Now I’ll never know.) In any case, Gary stopped submitting. But, as I said earlier, he didn’t stop writing. In fact, as one of his closest friends, Joe Nigg (a writer he’d studied with and who became something of a mentor), put it in a recent email, “He just kept on writing novels (more than 20 unpublished, self-bound), right through last year.” Last year being the year when Gary descended into the valley of cancer treatments. He no longer had the focus to write, but he did manage to fulfill one “bucket list” aim by reading the whole of Remembrance of Things Past. (Or did Gary think of it as In Search of Lost TIme? I’ll bet he did.) Gary only allowed me to read one of his many books—a harrowing, untitled novel about an alcoholic American soldier in Vietnam. Nigg says there several of these, and I can only hope that they’ll somehow find their way into print.

There are dozens of other Reilly stories, but I’d rather end with some his own words. Here is a sweet sentence from “The Biography Man,” in which the vendor of vanity autobiographies finishes a phosphate from the nearby drugstore in the small town where he’s come to hawk his wares:

Handing the empty glass to a short-haircut boy who turns to dash back to the drugstore to show the wagon man that he is the fasts runner of any kid in town, he leans back, his head not moving, but always watching, waiting, in the hot summer afternoon of clouds and a cool breeze now and then, no customers yet, but knowing, always knowing what is in the hearts of the people who will come in the night.

And this, from his extraordinary untitled novel—a passage that leaves us with the alcoholic Private Palmer as he anticipates participating in a competition for Soldier of the Month, for which he has been nominated as a result of his decidedly unheroic actions having been misperceived as heroic by his superiors:

He will not drink tonight. He will go to bed now, and in the morning he will get a haircut, and in the afternoon, wearing fatigues smelling of packing crates, and wearing boots with toss polished to an obsidian gleam, he will go across the street to battalion headquarters and wait in line with the other soldier-of-the-month candidates who will be coming from across the Central Highlands to participate in this competition: eager, clean-shaven, starch-pressed troops who will have their shit together. And when the time comes, he will go into the room and stand before the board, and with every question they put to him he will do a thing he cannot recall having done in a long time: without resorting to fraud, or subterfuge, or ingratiating self-deprecation, he will look each one of them in the eye and answer their questions honestly by saying simply: I don’t know. I don’t know. I don’t know. I don’t know. I don’t know.