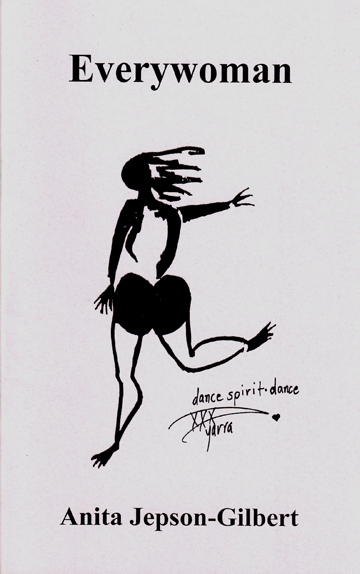 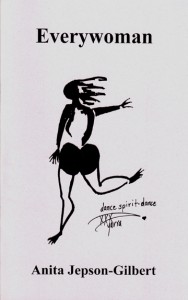 Everywoman is my friend Anita Jepson-Gilbert‘s riposte to Everyman, the 15th century English morality play. Instead of stock figures failing (all but two, that is) to rise to the occasion of their demise, Anita offers particular women (including herself) at particular moments in their lives: no stock figures here! And no creepy anguish about the grim reaper. Instead, there’s an honoring of women’s lives as lived. Here’s an example:

Call of the Faithful

Trudging into dawn,
the old woman slogs through snow
on her way to the chicken coop,
knowing full well that, inside,
the hens are already awake
but still nestled, stolidly
ruffled against the frigid
air, each with one hungry eye
holding vigil for her, waiting
for those first grains of morning
to fall kindly on the gentle
and the ungentle.

At the sound of her boots crunching
closer, a sudden flapping breaks loose.
A cacophony of chanting heralds
another day of chilling light
and the one who comes from nowhere
at the expected hour.

I’m not sure why I find those grains falling “on the gentle / and the ungentle” so moving, or why “the one who comes from nowhere / at the expected hour” should feel so powerful. I suppose because the need is great and the one who answers to it is mortal.

In any case, Anita manages this kind of layered directness throughout the book. Whether she’s writing about Southern Comfort’s fearful impact on a child, or the longing for a lost language that arises while making a traditional family recipe, or the overheard meditations of Picasso’s Blue Nude (who, strangely enough, has hung on my bedroom wall with her back turned toward me for at decade or more), or an awkward encounter with a child vendor on the road back from Tikal—Anita celebrates women as women. It’s a pleasure to meet them all!

To order Everywoman, contact Anita directly at Anitajg5@aol.com or from her venerable publisher, Pudding House Publications, though the book doesn’t show up yet in their massive list.

Filed under: and Tagged: Anita Jepson-Gilbert