I bought the Lebanese poet Joumana Haddad‘s Invitation to a Secret Feast: Selected Poems for three reasons. First, the book’s title is beguiling; second, the selection is edited and partially translated by Khaled Mattawa, whose work as a poet and translator I’ve admired for some time; third, she is associated with the Shiir magazine group whose tutelary presence was Adonis (Ali Ahmad Sa’id), a man who in my humble opinion should have been awarded the Nobel Prize years ago. 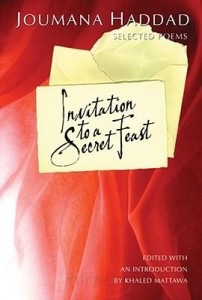 When I sit before you, stranger,
I know how much time you’ll need
to bury the distance between us.
You are at the peak of your intelligence
and I am at the peak of my banquet.
You are deliberating how to begin flirting with me,
and I,
under the curtain of my seriousness,
am already done devouring you.

I Am a Woman

Nobody, nobody knows
when I am hungry, when I take a journey,
when I walk and when I am lost.
And nobody knows
that my going is a return
and my return is an abstention,
that my weakness is a mask
and my strength is a mask,
and that what is coming is a tempest.

They think they know
so I let them,
and I happen.

They put me in a cage so that
my freedom may be a gift from them,
and I’d have to thank them and obey.
But I am free before them, after them,
with them, without them.
I am free in my oppression, in my defeat
and my prison is what I want.
The key to the prison may be their tongue.
But their tongue is twisted around my desire’s fingers,
and my desire they can never command.

I am a woman.
They think they own my freedom.
So I let them,
and I happen.

One of the most impressive qualities of Haddad’s poetry is how it creates complexity out of the simplest words. Except for a poem called “Adrenaline,” which is larded with scientific lingo, her poems are composed of everyday language, but collaged and layered, the meanings accumulated through morphing syntactical structures and dynamic rhythms. They stand out especially in an American context because our poems, bad and good, tend to reach for smaller effects, aspiring to be houses of mirrors rather than vistas seen from some windy precipice. Haddad insists on writing precipice poems—and what a pleasure it is to read them!