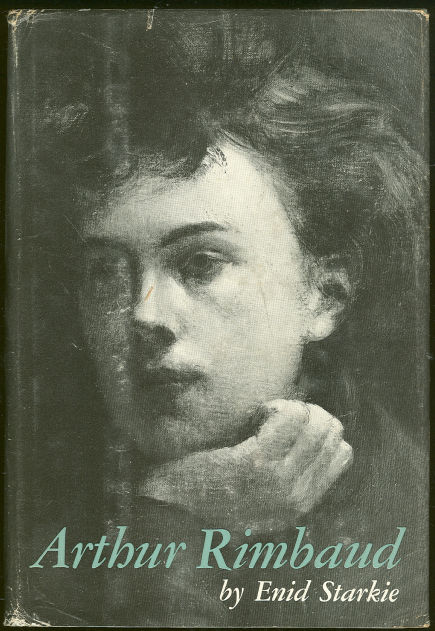 What is it about certain books that we buy and then leave untouched on the shelf? Or books we open now and then, sample a few paragraphs, then close and reshelve, temporizing: “Not in the mood”; “Too serious for summer”; “I need to read more about the period before trying this one”; “I need to learn French first.” But you never learn French. And yet finally—many years after buying the book—a strategem comes to mind, and a few days later you’ve read it, enjoyed it, been somehow awakened by it. “What took me so long?” 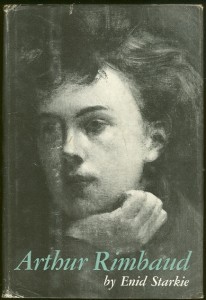 The most recent instance of this strange phenomenon in my life has been my finally reading Enid Starkie’s Arthur Rimbaud, the “new edition” issued by New Directions in 1961. For years, every time I’d looked into it, the fact that Starkie quotes Rimbaud’s poems only in the original French made me put it off. Then the bright idea—my strategem—to read it with my various translations of Rimbaud close at hand: Fowlie’s serviceable Complete Works and Selected Letters; Bertrand Mathieu’s masterful, if idiosyncratic, A Season in Hell & Illuminations; and Paul Schmidt’s uneven Arthur Rimbaud: Complete Works. My solution worked, and I could scarcely put the book down. 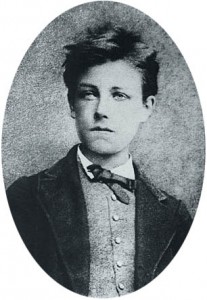 This isn’t to say that Starkie’s biography is all that powerful. Rimbaud is powerful, and when Starkie allows the poet to speak for himself and delivers the facts of his life with a minimum of interpretation, the book is compelling. But like many scholars who write about poets and their poetry, she devotes a lot of speculation to the sources of the poems, much of it offered in the spirit of explaining the poems away. “It is unthinkable that Rimbaud had not read…”; “He must have read and adopted the attitudes of…”; etc. Starkie again and again portrays Rimbaud as “childish,” his ideas derived from various books known to have been in his hometown library (and many known not to have been there—and yet he “must have read” them); other poems simply reflect incidents from his daily life as filtered through a deranged and deranging sensibility. Starkie mysteriously defends Rimbaud’s mother, who withheld affection from her children in the most nakedly manipulative ways, while condemning Rimbaud for his weakness in dealing with the emotional blackmail of Verlaine—a pattern of rebellion and capitulation that was clearly cultivated at his mother’s knee.

What’s more, and this will sound arrogant coming from a reader with no French, Starkie seems not to understand Rimbaud’s work. I don’t mean the verbal surfaces, of course, or the patterns of image and symbol that pulsate throughout his poetry; I mean the intellectual and emotional compulsions that express themselves through his writing. She repeatedly compares Rimbaud’s “childish,” “uncontrollable” genius with Baudelaire’s “perfection” of form, but fails to see that Baudelaire’s genius was backward-looking, a long goodbye in the failing twilight of a classical ideal, while Rimbaud’s embraced both the collapsing now of his historical moment and the nascent future to whose radical potential for spiritual renewal he gave such tortured voice. Because Starkie doesn’t grasp Rimbaud’s intentions, she views his “abandonment of poetry” at age 20 or so as a tragedy—a failure resulting from inordinate pride and obstinate immaturity. But it was no tragedy for Rimbaud; it was not even an abandonment of poetry per se, but of the kind of poetry he had taught himself to write. There is good evidence, after all, that he meant to return to some kind of literary life. But death intervened, and Starkie seems to hold that against Rimbaud. In fact, underlying much of Starkie’s narration is the idea that Rimbaud’s abandonment of poetry—in her mind a childish, prideful act—actually produced his death, so that his turning away from poetry becomes a kind of suicide. But nothing could be further from the spirit of Rimbaud’s work and life, for both of which he continued to have high hopes until his end was manifestly upon him.

All that said, Starkie does provide many moments of insight, not through interpretation but through description. Here, for example, she gives us an affecting scene from Rimbaud’s last days. He has returned from his decade-long sojourn in Abyssinia as a trader (ivory, musk, guns and more) to his mother’s farm in Roche, where he expects to recover from what will turn out to be terminal cancer. His doctor, Beaudier, and his sister Isabelle have concluded that he will almost surely die, but that he should be encouraged to believe otherwise. For a time Rimbaud allowed himself to trust them:

The pain was […] on the increase and allowed him no respite. Then the doctor ordered for him a soporific, to be taken at night, so that he could snatch some sleep. But Arthur preferred to the doctor’s prescription a tea made from the poppy seeds which Isabelle used to gather in the garden. When he had drunk a cup of this beverage he used to reach a state of half dreaming in which his faculties seemed to loosen and all his reserves seemed to break down. Then he felt, what he never experience otherwise, a desire for confidence,s a longing to open his heart. When he was in this condition, he used to close the shutters and doors of his room, even in broad daylight, light lamps and candles, and in that close, mysterious atmosphere, while he gently turned a little barrel-organ or plucked an Abyssinian harp, he used to relate the story of his life, tell of his dreams of the past and of his secret hopes for the future. His slow, sad voice then seemed to take on beautiful modulations and the language in which he spoke was very different from his everyday speech, full of Oriental turns of phrase and Oriental images. At such moments he was living in a wakeful dream and returning to the visions of his childhood, to all that he had buried deep in himself for twenty years and which now burst through the heard crust in a burning stream. Yet once, when Beaudier [the doctor] spoke to him of his poetry and literature, he made a gesture of disgust and answered coldly, “Il s’agit bien de tout cela. Merde pour la poésie.” Yet at this very time, in 1891, Rimbaud’s fame was at its height in the literary circles in Paris, but none of those who acclaimed him as the greatest poet of the nineteenth century knew that, scarcely three hours’ distance away, the poet they revered was ending his life in a kind of dream. [pp. 408-409]

In the end, Starkie’s biography is irreplaceable, although more recent research (I’m told) has revealed more details of Rimbaud’s life, especially of his life in Africa. But readers who want to understand the deeper sources and intentions of Rimbaud’s work would do well to turn not to scholars but to poets and other writers whose understanding is based on their own experience of the creative process. I’m thinking in particular of Henry Miller’s The Time of the Assassins and Yves Bonnefoy’s revelatory meditation entitled simply Rimbaud. The former is finally more about Miller than about Rimbaud, but Rimbaud constitutes the essential negative space in Miller’s composition that makes the positive space stand out with such vibrancy. Bonnefoy’s book, on the other hand, wrestles with the angel Rimbaud on a passage-by-passage, sometimes word-by-word, level; and because Bonnefoy is himself a French poet of great genius, his engagement is illuminating in ways that are simply inaccessible to Starkie, who cannot forgive Rimbaud for turning his back on the poetry she so earnestly labors to explicate.