Whose Side Are You On?

Browse: Home » Whose Side Are You On?

Whose Side Are You On? 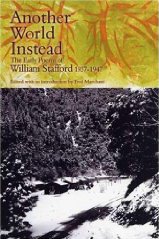 I side with those, like the Irish poet Sinéad Morrissey, who prefer Collecteds to Selecteds. (See my earlier post for Morrissey’s poem on the subject.) But what if there’s no Collected? Such beasts are typically posthumous affairs and take years to assemble, which seems to be the case for William Stafford. But one of the pleasures to be had from a Collected edition—instances of early poems written during a poet’s formative years—are at least available now in Stafford’s case. The book is called Another World Instead: The Early Poems of William Stafford, 1937-1947, a thoughtfully chosen selection edited by Fred Marchant and recently published by Graywolf. 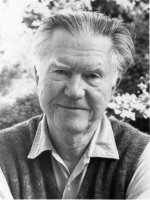 Like most poets, Stafford wrote many flawed poems as he developed, but what’s amazing is the fact that his characteristic voice is there, if only in flashes, from the beginning. Many of these were written during his years as a conscientious objector during World War II, when he and others like him were exiled to various Civilian Public Service camps around the country. Stafford registers the many degrees of isolation he experienced, which included moments of doubt, exaltation, anger, depression, and zen-like connection to the natural world.

Here’s an example, written in transit between camps in Magnolia, Arkansas and Los Prietos, California. The year is 1942:

A girl smiles Eden; the wind blows Arabia;
The sound of a bell touches dark blue on the far wave;
The sky blues away into earth; the earth bends.

Time flutters by, an hour, a day,
(Even a week is a light thing).
But long time is solid,
Long time is heavy, a club to be hit with.

Here’s another, from December 1945, one of many dealing with the effects of war on the human being:

The arm is bayonet good
and the feet for marching.
The eyes can lick over a blasted town
and then read a menu.
The voice can sing anthems for action
and then pray.

But the heart is not fit enough.
It can’t arm itself.
It can’t march.
It cannot even beat near a blasted town
and then sing.
The heart is rejected for military service,
or for essential civilian duty.

What are you doing here, heart?
Heart? whose side are you on?

As we stand on the threshhold of a new, more hopeful stage of America’s history, so many of us with our hearts on the side of Barack Obama and what his election would mean, Stafford comes to mind as a touchstone voice: a voice, as J. M. Coetzee puts it in The Age of Iron, “trying to keep a soul alive in times not hospitable to the soul.”