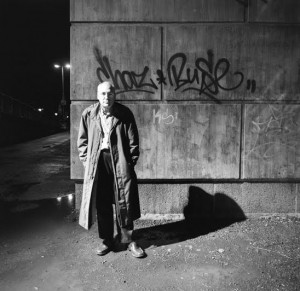 Today’s Poem-A-Day poem from The Academy of American Poets is Charles Bernstein’s “All the Whiskey in Heaven”. Bernstein is famous for co-founding both the journal L=A=N=G=U=A=G=E back in the ’70s and The Electronic Poetry Center at SUNY-Buffalo in 1995, but for me he’ll always be the Woody Allen of poetry (I’m a big Woody Allen fan, in spite of everything); Bernstein’s funny even when he’s being serious—or especially when—and people find brilliancies in his work that are really just the sparkle of his highly polished shtick. Bernstein admirably defined something he called “official verse culture” in a 1983 essay shtickily entitled “The Academy in Peril”: “What characterizes the officially sanctioned verse of our time […] is a restricted vocabulary, neutral and univocal tone in the guise of voice or persona, grammar-book syntax, received conceits, static and unitary form.” (It took Ron Silliman, who has an ad man’s instinct, to deploy this notion under the rubric “The School of Quietude,” a rubber sword he’s been battling the Philistines with for some time now.) It’s interesting to keep these characteristics in mind when reading Bernstein’s poem, and it would be only interesting if “All the Whiskey in Heaven” were not the title (hence, presumably the touchstone) piece from his selected poems volume, recently issued by Farrar, Straus and Giroux. A glance at the blurb-filled back of the book reveals just how successful Bernstein has been in helping to establish a new official verse culture and getting himself appointed poet laureate of it. Small wonder he can earn extravagant praise from the likes of Ashbery and Perloff while producing funny but ultimately pedestrian doggerel like this whiskey poem. Bernstein has arrived. Like Ashbery, his every fart will now be declared perfume in the Academy that evidently is no longer in peril.