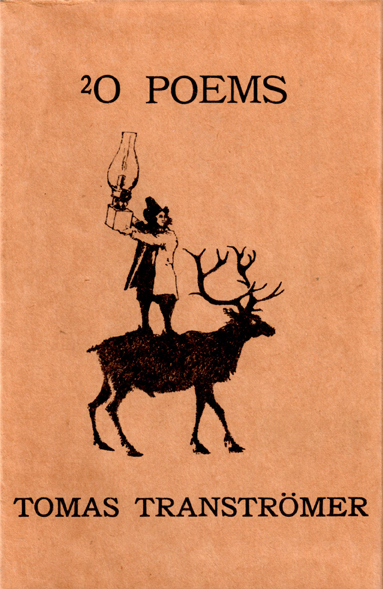 I have heard the Swedes singing cheek to cheek.
I do not think they will sing to me.

But that’s ok. I feel like they’ve sung to me—sort of—because Tranströmer was on the No Bull Prizes list I posted back in 2007. The NYT calls his poetry “bleak but powerful,” which is only half true, because Tranströmer (it seems to me) is seldom bleak. In fact, he consistently honors the persistence of a rich inner life in what has been perhaps the least inward period in human history—a period in which inwardness itself has been relegated to the realm of neurosis. He’s also written a number of profound political poems, like this one from the volume pictured to the right:

In the painting of the kitsch Congolese artists
The figures are skinny as insets, their human energy saddened.
The road from one way of life to another is hard.
Those who are ahead have a long way to go.

A young African found a tourist lost among the huts.
He couldn’t decide whether to make him a friend or object of blackmail.
The indecision upset him. They parted in confusion. 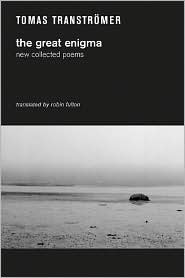 Europeans huddle around their cars as if the cars were Mama.
Cicadas are strong as electric razors. The cars go back.
Soon the lovely darkness comes and washes the dirty clothes. Sleep.
Those who are ahead have a long way to go.

Perhaps a migratory flock of handshakes would help.
perhaps letting the truth escape from books would help.
We have to go farther.

The student studies all night, studies and studies so he can
be free. When the examination is over, he turns into a
stair-rung for the next man.
A hard road.
Those who are ahead have a long way to go.

I want to add that while Robert Bly has been a steady and energetic advocate for Tranströmer’s work, other translators have helped to establish his influence in English. Chief among these is Robin Fulton, whose translation of Tranströmer’s new and collected poems, The Great Enigma, was issued by New Directions in 2006. It includes Fulton’s magnificent version of the visionary meditation “Baltics.”