The Spirit of Place

Browse: Home » The Spirit of Place

The Spirit of Place 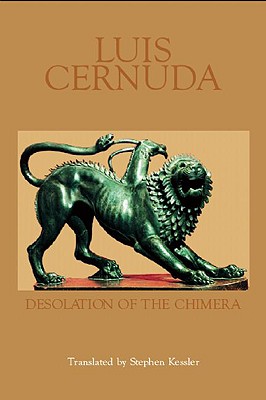 Here I am in Mexico, earlier than usual this year, though we may be back again in April. As ever, I’ve brought some Spanish translations along to enhance what Lawrence called “the Spirit of Place.” One is Roberto Bolaño’a novel of murder and sexual obsession, The Skating Rink, at least one quote from which will be turning up in this week’s Friday Notebook. I’ve also been reading Stephen Kessler’s fine translations of Luis Cernuda‘s last poems, Desolation of the Chimera. On the back cover of the book is a quote from Octavio Paz, who says that in Cernuda we encounter a poet who “really speaks, effectively possessed by the fatality and the lucidity of passion.” Exactly! The challenge, though, is bringing him over into English without losing too much of his multi-layered Spanish. Kessler’s wonderful work inspired me to put my own hand to the task. Here are a couple of efforts—versions of Cernuda’s “La poesía” and “Un momento todavía”. For Kessler’s versions—well, I highly recommend you buy his book! 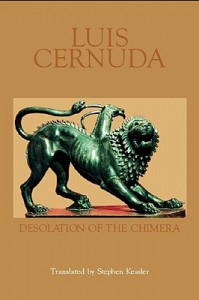 Favored by fate to be your servant,
Caught up and devoted, the boy—
What could he do but follow you?

Later, as a youth, lovesick, he knew
What your power meant, and served it
Regardless, like nothing else in his life.

One day, though, a man, he asked himself:
What had this long servitude earned him,
Who envied this man’s liberty, that man’s luck?

And he tried being only himself, to serve you
No more and live for himself, like other men.
You left him, like a child, to his whims.

Afterward, utterly in want without you,
To the call of your voice, or his dream of it,
Aroused in his servitude, he answered: “My Lady.”

The sea grayish and green;
The air also, swaddling it.
In his heaven, God rains.

From a Japanese pine’s
Branch, warbling springs up:
A bird back in its nest now.

Now, at the wide-open window,
You stand, still not knowing
What you’re waiting for.