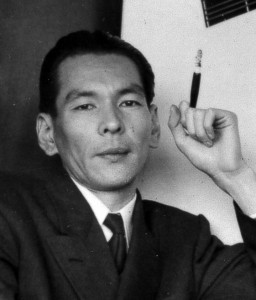 Tamura Ryuichi in 1956 (age 33) at the publication party for his first collection, Four Thousand Days and Nights

I believe what is most important for a poet is the point in time and place at which he discovers his own archetypal poem. That is because this archetype represents the entirety of the “mapless journey” he is destined to take, and contains therein all concepts of time, death and love as a single entity. It seems to me that a poet perilously travels through the discovery and re-discoveries of the archetype, and his journey takes the form of battles against his own archetype.

To a poet, imagination is the energy that ceaselessly stimulates and re-creates his passion. Unless this energy is persistently maintained, the pathway of a poet’s inner passion will not evolve. As C. Day Lewis also advises, “To fortify imagination, write poetry.” In order to discipline their imagination, painters paint pictures, and composers write music. The disciplined imagination will further cultivate the inner pathway for a poet, a painter and a musician, and push forth a new life. Here lies a furious interaction between the energy and his technique.

—Tamura Ryuichi, from two essays—respectively, “Mapless Journey” and “A Roadside Pigeon”—quoted in “A Journey to Fear,” by Ayukawa Nobuo, in Tamura Ryuichi: On the Life & Work of a 20th Century Master, Edited by Takako Lento and Wayne Miller (Pleiades Press, 2011).