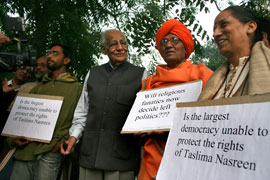 And as you can see in this photograph by Shailendra Pandey, attacks on free speech can still — somewhere in the world — bring people into the streets. This is the sort of resistance we’d like to see more of in countries where Islamic Fundamentalism is rampant, just as we’d like to see more of it here in the U.S.—in response, let’s say, to presidential candidates who claim not to believe in evolution, or to sitting presidents who treasonously reveal the identities of CIA agents to punish their spouses for telling the truth in print.