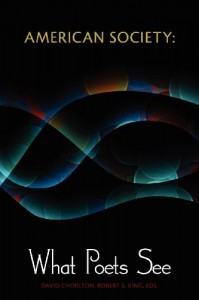 I’m happy to say that I have three poems in a new anthology from FutureCycle Press called American Society: What Poets See. It’s cleverly put together: Poets appear alphabetically with all their poems together; but a secondary table of contents groups poems by theme, and using it yields the heady experience of hopscotching through the collection. (I can’t wield that word without a nod to the great Julio Cortázar, whose Hopscotch broke this structural ground in 1963.) Here are the groups the editors, David Chorlton and Robert S. King, came up with:

Clearly, this is a critical look at America, but I haven’t found many polemics here. The poems are complex, outward-looking, sometimes angry, sometimes sharply ironic, sometimes flat out hilarious. Reading it has more than once brought to mind the magnificent close of Shelley’s “Defence of Poetry”:

It is impossible to read the compositions of the most celebrated writers of the present day without being startled with the electric life which burns within their words. They measure the circumference and sound the depths of human nature with a comprehensive and all penetrating spirit, and they are themselves perhaps the most sincerely astonished at its manifestations; for it is less their spirit than the spirit of the age. Poets are the hierophants of an unapprehended inspiration; the mirrors of the gigantic shadows which futurity casts upon the present; the words which express what they understand not; the trumpets which sing to battle, and feel not what they inspire; the influence which is moved not, but moves. Poets are the unacknowledged legislators of the world.

It’s a fond wish to think so.* If these poets—humanistic, aspirational, empathetic, articulate (yes, I would like to believe those adjectives apply to me as well)—speak for the better angels of our nature and that speech carries any weight at all, America might yet overcome its worst tendencies. That hope is what makes this collection uplifting to read.

Let me add that Goodreads is running a drawing for a free copy of the book here. Entries must be received by November 9.

Or you may consider that the holidays are right around the corner and choose to stock up on gift copies here. After, that is, snapping up you signed copies of Thread of the Real!

I met a traveller from an antique land
Who said: “Two vast and trunkless legs of stone
Stand in the desert. Near them, on the sand,
Half sunk, a shattered visage lies, whose frown,
And wrinkled lip, and sneer of cold command,
Tell that its sculptor well those passions read
Which yet survive, stamped on these lifeless things,
The hand that mocked them and the heart that fed.
And on the pedestal these words appear —
‘My name is Ozymandias, king of kings:
Look on my works, ye Mighty, and despair!’
Nothing beside remains. Round the decay
Of that colossal wreck, boundless and bare
The lone and level sands stretch far away.

The consciousness that produce this poem also produced the Arab Spring. In America, it may produce a much needed Constitutional amendment denying the protections of personhood to corporations. We shall see.