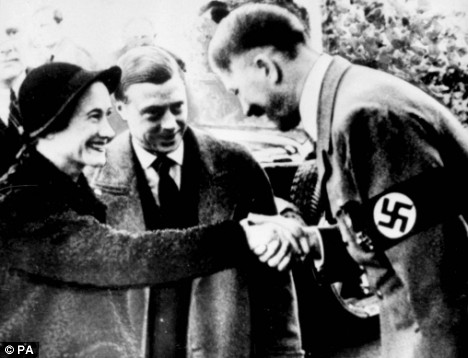 I missed Christopher Hitchens’ review of The King’s Speech back in January, but it deserves to be widely read in the wake of the movie’s success at the Oscars last night. As Hitchens notes, Speech “is an extremely well-made film with a seductive human-interest plot […] but it perpetrates a gross falsification of history.” Its misstep lies in the way it avoids the issue of the royal family’s support of Neville Chamberlain’s appeasement policy toward Hitler; worse, the love-besotted narcissist Edward VIII’s pro-Nazi sympathies are barely hinted at in the film.

Now, I don’t share Hitchens’ outrage exactly; I share it inexactly (to paraphrase Marvin Bell). Playwrights need not cleave slavishly to the historical record, and I understand why these filmmakers didn’t want to distract the audience from the personal struggle that lies at the heart of the movie. But The King’s Speech, beautifully acted (for the most part) as it is, seems to me distinctly inferior to at least two other nominated films, The Fighter and True Grit, both of which I expect people to still be watching in 20 years, long after The King’s Speech has become a footnote.

It seems to me that the success of Speech has more to do with the media’s infatuation with the British royal family, which will be on flagrant display again toward the end of April, when Prince William and Kate Middleton will completely dominate our so-called news outlets. They have already begun the assault, of course, and The King’s Speech is really little just the second wave of what Hitchens calls the rebranding and relaunching of the British royal family—”this rather odd little German dynasty.”

America fought a bloody war to achieve political independence from the likes of these people, but we have yet to achieve emotional independence. Something in us still wants to be ruled, evidently. A desire that we can at least be glad is confined to the realm of passing amusements.