On William Michaelian’s A Listening Thing

On William Michaelian’s A Listening Thing 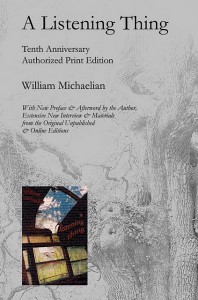 I wanted to say a word about a quietly wonderful novel I just finished reading, by my cyber-friend, William Michaelian. I’ve never met William in the flesh, but have become a fan over the past few years, especially of his poetry. The fact is I don’t read much fiction; all too often fiction, being prose, wastes too many words on stage direction—“Jack began climbing the beanstalk, his soft leather booties slipping now and then on the dewy leaves,” etc.—while the humanity of the story goes missing.
If I were limited to one statement about William Michaelian’s novel A Listening Thing, it would be: “This is a novel that investigates and celebrates our common humanity from beginning to end.” For example, the book offers:
I don’t want to give away too much about the book. It isn’t what one would call “plot driven,” but there is a good deal of “action” at the psychic level, and leaving out even a minor turn in that action would be a shame. Because the book, it seems to me, is essentially a meditation on loneliness, it is profoundly American. The overwhelming otherness of everything in our culture that we are told to value is what makes us all feel isolated. Small wonder that our children can be driven to suicide via Facebook (where all their “friends” reside), or that Twitter can be paralyzed by Justin Bieber cutting his hair, or that Tea Party numbskulls can boo a gay soldier during a GOP debate—as long as he is safely presented in a video and not armed and uniformed within touching distance. Of course, A Listening Thing takes place before all these technological enhancements of our isolation took root in American culture—but the currents were there. Stephen Monroe suffers from them, and in suffering along with him—for we’re all just as adrift, however we might pretend otherwise—is a healing experience.
I can’t end this post without noting that there is a strangely apropos presence who broods over Michaelian’s book: Samuel Beckett. Specifically, Stephen Monroe spends the entire book attempting to read Beckett’s short novel The Unnamable. It’s not clear if he ever completes it, but the psychic dilemma of Beckett’s narrator—“Where now? Who now? When now? Unquestioning. I, say I. Unbelieving.”—is Stephen Monroe’s. But Monroe has three saving graces in his life—an ex-wife, a son, and a mother who all love him. The Self that is so vitiated and reduced in Beckett is redeemed, in the person of Stephen Monroe, by those uplifting connections. Stephen Monroe is also redeemed by language, which Beckett found so inadequate to the task of self-expression. This is why Michaelian’s book is so compellingly humane: we never doubt that narrator is telling us the truth. In a society awash every day in public lies, it’s refreshing to realize that honest expression is still possible.
__________________
* Things have gotten considerably worse for typesetters since the late 1990s, the time period in which the novel’s action takes place. Not only has computer software placed a vast array of typefaces at everyone’s fingertips, the ease of applying them has made every yahoo with a keyboard think he or she can design a readable page.
** I believe it was Robert Bly who observed that so many American novels begin with the main character waking up because Americans write so poorly about dreams. Well, not William Michaelian.
Filed under: and Tagged: Samuel Beckett, William Michaelian