On Percival Everett’s The Trees (a 199-word review)

Browse: Home » On Percival Everett’s The Trees (a 199-word review)

On Percival Everett’s The Trees (a 199-word review) 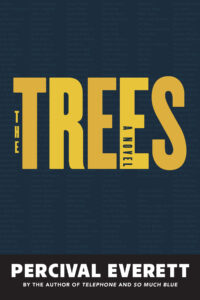 Clearly, Percival Everett’s longtime publisher, Graywolf Press, couldn’t quite figure out how to characterize his new novel, The Trees. On the back cover: “A blistering tale of revenge in the Deep South.” “Blistering,” a hype word from 1950s B-movie trailers. “Revenge,” yes! But: “In the Deep South”—well, the novel only begins there with gruesome murders and mutilations of white racists in Money, Mississippi, where Emmett Till was murdered in 1955. Yes, it’s all connected. But Money can’t contain the spirit of retribution fueled by American history. The real history, not the one we learned in school. The history American racists are dead set against—a phrase you’ll find especially apropos when you read the book.

Everett has made the eerie violence in his story palatable by making it hilarious. Beyond being a justified revenge fantasy, the book is a satirical send-up of detective novel tropes, the Southern racist mindset, the deep-rooted stupidity of white supremacist “thought,” and the often clueless complicity of alphabet-soup law enforcement (MBI, FBI, etc.). The Trees is a heady and visceral brew with hints of Jonathan Swift, Night of Living the Dead, Monty Python, and The Fire Next Time.

My recommendation: Don’t miss it!