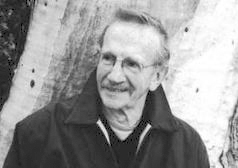 The New York Times reports that Philip Levine has been named PLOTUS. It’s a well-deserved honor. Levine is one of those poets who is so good, so consistently good, that he’s somewhat taken for granted. He’s also one of those poets whose late work is stronger and wiser than anything he’s done before. He’s become especially adept at multi-dimensional narratives condensed into small spaces, with most of the connectives prose would require removed, so that everything seems to stand before us as a whole, somehow. Here’s an example, from Levine’s latest collection, News of the World:

Smiling, my brother straddles a beer keg
outside a pub. 1944, a year
of buzz bombs. He’s in the Air Corps,
on a mission to London to refill
oxygen tanks for B-24s, the flying coffins
as they were dubbed by those who flew
them night after night. Fifty years later
a German writer on a walking grip
through East Anglia meets a gardener
who recalls as a boy of twelve hearing
the planes taking off at dusk to level
the industrial cities of the Ruhr
and later when the Luftwaffe was all
but destroyed whatever they why could reach.
“50,000 American lads died.” The gardener
recalls waking near dawn, the planes
stuttering back in ones and twos.
how many Germans died we may
never know. “Must have been women,
children, and the very old what with
all the eligible men gone to war.”
The German novelist writes it down
word for word i his mind and goes
on to an appointment with an English
writer born in Germany, a Jew
who got out in time. My brother
recalls a young woman who lived above
the pub, a blonde, snapping the picture
outside the pub with his own Argus
C3, and points out a horse and wagon
around the corner loaded with beer kegs
but with no driver. The pub is closed,
for it is not long after dawn and the city
is rising for work and war. We call the time
innocent for lack of a better word, we call
all the Germans the Nazis because it suits
the vengeance we exact. Some hours later
the two writers born in Germany sit
out in a summer garden and converse
in their adopted tongue and say nothing
about what they can’t forget as children,
for these two remain children until they die.
My brother, blind now, tells me he is glad
to be alive, he calls every painful day
a gift he’s not sure he earned but accepts
with joy. he lives in a Neutra house
with entire walls of glass and a view
of the Pacific, a house he bought
for a song twenty years ago in disrepair.
he accepts the fact that each year squadrons
of architectural students from Europe and Asia
drop in to view the place, and though
he cannot see he shows them around
graciously and lets them take
their photographs. When I tell him
of the 50,000 airmen the gardener told
the novelist about, his blind eyes
tear up, for above all my older brother
is a man of feeling, and his memory is precise—
like a diamond—and he says, “Not that many.”

Filed under: and Tagged: Philip Levine