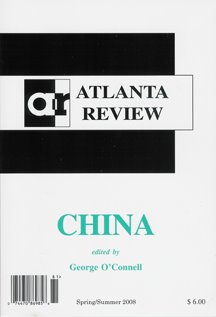 I’ve been trying to gather my scattered thoughts about the many terrific books I read in Mexico, but I’m finding that those two weeks of being a reader as opposed to being a writer have left me unfit for anything but more reading. So, instead of getting my thoughts down for posting, I wandered off into the new issue of The Atlanta Review, much of which is devoted to poetry—classical and contemporary—from China. It’s a rich and rewarding issue of what has become one of my favorite journals. 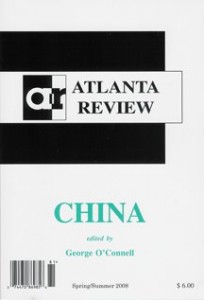 Of course, one of the chief functions of a literary magazine is to introduce us to writers we would otherwise never hear of, or whose work is awaiting discovery by a book publisher willing to take a risk. One of the Chinese poets whose work was new to me is Wang Jiaxin: the power of his poems in English is surely a testament to the skills of the translators, Diana Shi and George O’Connell (John Crespi was also involved in translating Wang Jiaxin’s poems). Here’s an example:

The Last Days of Octavio Paz

Mexico City, dusk,
he watches wide-eyed
as a great conflagration
devours his house, his life’s
possessions, the years
of manuscripts, poems finished
and unfinished, the Aztec mask,
the Picasso, chairs
of his ancestors, photographs from childhood,
the joyous dome, its ribbed beams and rafters,
everything turning to ash
in a whirling column of fire.

The flames blaze on,
charring night,
lick the black wings
soaring from his poems,
consume the leaden hours,
human illusion, human desire,
wish and ambition,
emptiness and ash—
all crackling in a fire
come late in life,
as the firemen shout in the choking dark,
fleeting shadows.

So late, so late
but now set free
from long affliction,
Octavio Paz will sit once more
beside a Paris street,
dry leaves scuttling at his feet,
silent, a far off light
dawning on his brow.

I just realized—Mexico has found me even now, via China! I imagine this means I can’t avoid my bloggerly duties much longer….