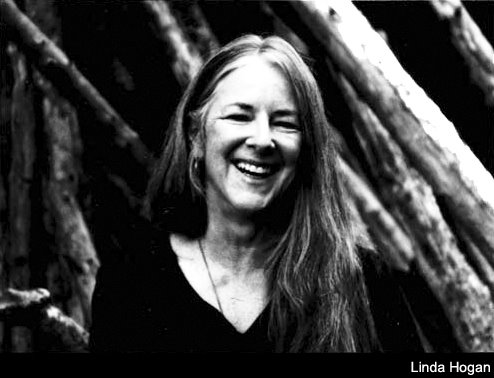 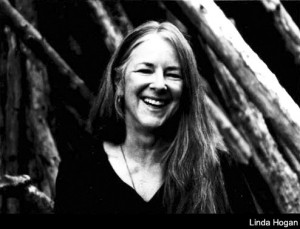 Linda Hogan is one of my favorite poets. She’s best known to the wider world as a novelist and essayist, but at heart she’s a poet, and her new poetry collection, Rounding the Human Corners, is a profound gift, especially for someone like me, who considers himself a humanist—although it’s a term that fits less like a glove than a too-small suit. I especially feel the constrictions of my “philosophy that usually rejects supernaturalism and stresses an individual’s dignity and worth and capacity for self-realization through reason” [Webster’s] when I read a poet like Linda Hogan. Her work arises from a world-view (itself no doubt flowering from her Chickasaw heritage) in which the lines we’ve drawn between human and animal, culture and nature, science and spirit, self and world, are revealed to be distinctions without a difference. One might need to coin some word like “anihumanist” (an “animist-humanist”) or maybe “spiritual Darwinist” would be more apposite.

What I mean to say is that reading Linda is a happy challenge. (I call her Linda because she’s a friend. She lives in the next valley over, along Bear Creek; my valley doesn’t have even a proper creek, just a trickling runoff from an up-top spring.) The challenge lies in her willingness to expose the unreality of the categories that we in the West—the West of Aristotle as well as the West of John Chivington—impose with such alacrity upon ourselves and others. “Between the human and all the rest / lies only an eyelid,” Linda tells us, and of course she’s right.

She’s right, but taking her rightness seriously means relearning a few things, starting with the sense of self, the sense of our bodily existence, its history and its future. Linda’s poem “In Time” investigates that sense, starting—as many of her poems do—with the kind of everyday observation any of us might make:

I have my mother’s wrist,
my father’s hands.
I walk on the same ankle bones
of a three-million-year-old amphibian.
In such a world is the nature
of limbs, the floating rib,
the creation of bone
grown long from infancy
and nerves following pathways known
to the future
from the past when God’s arm, once wing,
once fin,
swam through an ocean of creation
and reached out
to climb the shores of a world
without a knowing care for what we would become,
our evolved hand,
sinew giving way for monsters and kings
for prayer and the trigger finger
becoming stronger,
the human muscle,
and all this from a single cell.

I imagine the dour Christopher Hitchens, a fellow humanist, stubbing his tongue on the word “God” and flinging Linda’s book away in disgust, missing the point, missing the wisdom. He likes the strangling fit of his suit too much.

There is a freshness in everything Linda writes, which seems to spring from an almost childlike openness. Wonder pleases her, and because she is disarmingly honest and humble (she has poem here entitled “Humble,” wherein she admits, “I am still a beginner in this world”), she helps her readers share her wonder. Wonder is her instinctive response to the abundance of life on this planet. Consider, for example, the various creatures that appear in her poems; here are just a few: ants, horses, jellyfish, wasps, foxes, earthworms, dogs, deer, spiders, whales, buffaloes, eagles, bats, and turtles. And these are only the animals! Linda also speaks with intimate care about kelp and stars, primroses and glaciers, canyon walls and magnets and the sands of Mongolia. Linda’s poems are revelations of this abundance, and remind us that we are part of it. In fact, in the poem “Secret” she calls it “the great humanity of being.”

“Every day I ask myself, what is a human?” she writes in her poem “The Given.” Her answer seems to be that everything is human, and everything deserves the love and respect we typically reserve for ourselves alone. In her poem “Loneliness,” Linda seems to argue that the very arrogation of ultimate significance to ourselves is what makes us feel so damned lonely, even in the midst of earthly abundance, but argues as well that this self-delusion can be overcome:

They say there are only four chambers of the heart.
I know there are five
and that fifth one opened,
not opened, but broke.
It was a pure thing, that moment.

And if my heart could kneel down
and if my spirit could call back that moment,
if my body hadn’t begun its ripening
into old age
and been also as young as the first grape in the arbor
believing in future wine, it wouldn’t.

Loneliness had to prove again
that I was only human
and there was one part of m yself not yet
given.

And hearing the gnats that day in their circle above us,
the smell of earth around us,
the wild grass, altogether so natural
as if I was, we were, alive with it,
as if I was not a human separate, but earth,
part of it again,
as splendid as the deer standing in trees
or the blue dragon flies in air.

I longed to be a flowering branch,
the sea in its rocking, an unguessed world.

Even now it seems so much as if the body was only
the desire of the planet,
as if it could turn itself into the universe
both together, the same,
because such a thing is irrational flesh,
irrational earth.

Surely there is no need to give Linda’s abundant, breathtaking world-view a name, but I can’t help but wrestle with the question of why this vision is so challenging. Why is it not “humanism”?—which, after all, makes many assertions I think Linda would agree with. “Man is a part of nature and […] has emerged as a result of a continuous process,” says the first Humanist Manifesto; and furthermore, “Holding an organic view of life, humanists find that the traditional dualism of mind and body must be rejected.”

But the Manifesto also constricts in ways that Linda—and I, being swayed by her ideas—would have to reject: “[T]he nature of the universe depicted by modern science makes unacceptable any supernatural or cosmic guarantees of human values. Obviously humanism does not deny the possibility of realities as yet undiscovered, but it does insist that the way to determine the existence and value of any and all realities is by means of intelligent inquiry and by the assessment of their relations to human needs.” Are we really to let go of mind/body dualism and yet cling to human/world dualism? And is Reason (what humanists mean by “intelligent inquiry”) the only access to reality allowed?

I’m afraid I can’t wear that suit, which seems to be made of flexible fiber but is really a form of the old medieval armor. As Yeats put it, “There’s more enterprise / In walking naked.” You’re free to do that, Linda’s poetry seems to say. Irrational as it seems, maintaining your vulnerability is best for you and best for the Earth. If the thinkers who wrote the Humanist Manifesto would rewrite it with Linda’s vision of “the great humanity of being” in mind, I imagine they would make different assertions, and possibly even realize that the other core dualism they subscribe to—that of natural vs. supernatural—must also be overcome. Otherwise, how could a good humanist like me begin to understand the extraordinary impact of Linda’s poem “The Given,” which concludes:

The present is so bare and tender
like the garments of the newly saved
I can see through, the revealed
nipples, thighs, buttocks
and I wonder which of the 365 gods
are inside the body today
and if in the future
when the air leaves your lungs
and, as some say, you stand at the beginning
of a tunnel,
you remember your name.
No, not that one, the real one,
The Given, the one
lost somewhere
along the way.