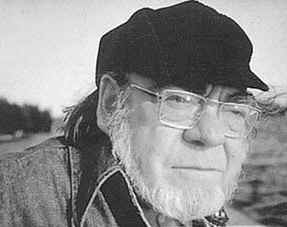 The great French poet Guillevic has been a personal favorite of mine ever since I came across Denise Levertov‘s translation of his Selected Poems in 1970 or ’71. I’ve read Englished volume of his, I think, and only one failed to capture my imagination, the sequence published by Unicorn Press under the title Euclidians; as translated by Teo Savory, the poems struck me as a bit loose-jointed, somehow overly relaxed. Besides, I’m terrible at math, and each poem either addresses or is written in the voice of a particular geometrical figure—so the collection felt like an exercise.

Luckily, Richard Sieburth had some of the same feelings about Savory’s versions and undertook to retranslate the sequence, which Ugly Duckling Presse published last year in its Lost Literature Series. Sieburth gave the book a decidedly less pedantic title—Geometries—and translated its 42 poems into extremely concentrated, elemental verse that feels like the “real” Guillevic, at least as I hear him through the distortion-screen of my own language.

Here are a couple of examples:

Failing to make it
As a circle,

One can always
Become an angle.

Failing to live
At peace with yourself,

And then get some rest
While you dream

Of closing
Your far side,

Forever open
Onto the unknown.

Guillevic also exploits the transformational aspect of these figures, as when he places two different triangles in sequence:

I have succeeded
In putting myself in order.

I tend to find myself
Quite pleasing.

I have gone too far
In my need for order.

Nothing more can happen here.*

On the back of this edition, Pierre Joris notes that “[as] Englished by Richard Sieburth[,] these gems have kept all their Gallic lightness and grace.” He’s right. And couldn’t we all use a little more lightness and grace?
__________________
* This version is an example of why I enjoy having multiple translations. Teo Savory renders the poem in a slightly more interesting way:

I have gone too far
with my obsession for order.

There’s no future in it.