Göransson and Blatny and Tics, Oh My!

Browse: Home » Göransson and Blatny and Tics, Oh My!

Göransson and Blatny and Tics, Oh My! 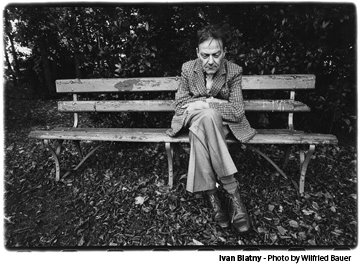 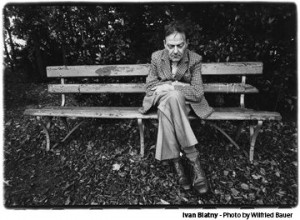 Back on March 22 Johannes Göransson posted a poem by Ivan Blatny*, a Czech poet who defected to the West when the communists took over in 1948. Blatny lived from then on in England, until his death in 1990. Göransson posted the Blatny poem by way of recommending The Drug of Art: Selected Poems of Ivan Blatny, issued in 2007 by Ugly Duckling Presse; he declared the poem an example of the poet’s “greatness.” I read the poem and couldn’t fathom by what standard it could be called “great,” and said so. Here’s the poem:

So restoration is not spelled au
I spelled it so thinking of the czech word restaurace
to restore
and go with a lady to the Room
like a unicorn in the mirror
all naked in the mirrors
so that I could see the blood trickling.

I have to say I wouldn’t buy this one based on this poem. The first 3 lines have nothing to do with the rest of the poem, which themselves are full of gestures toward meaning that float by like soap bubbles. “Room” capped. Why? “Like a unicorn”—who: the speaker or the lady? “All” naked? (Speaker, lady and unicorn?) And suddenly there are multiple mirrors, for no discernible reason. And of course the de rigueur blood, provided perhaps to suggest that there are important human issues at stake in the poem, but the blood trickles from no one to nowhere. These gestures strike me as avant-garde tics, and all (of course) connected to a “misspelling” which is presented as cross-culturally significant. All quite phony, it seems to me.  But maybe you can open this up to explain why you attach the notion of “greatness” to this?

Göransson answered my comment by attacking my “reading framework” and dismissing it as “pedantic.” But he did promise to post an extended response defending his assessment of Blatny’s poem, and today he did just that. You can find it here and, if the following comments are to make any sense, you really should read it.

Göransson begins by putting forward some aesthetic ideas, but not in a positive mode. Instead he tells us what he opposes. “I am opposed to,” he writes:

Note that I didn’t ask him to defend the poem per se, but to defend his assertion that it is “great”, and I did not say that sharp turns are bad, only that this poem’s sharp turns seem to occur for no reason (it’s the incomprehensibility of the turns that are problematic). The rest—the idea that a great poem cannot, by definition, be “ephemeral” in the napkin-jotting sense; the idea that a great poem displays organic unity; and the idea that avant-garde poetry has developed “tics” (“a characteristic or recurrent behavioral trait”), some of which are on display in Blatny’s poem—are ideas I hold and am happy to defend.

I won’t reprise all of Göransson’s argument, but do want to point out that he defends “the multilingual nature of [Blatny’s] project,” which I didn’t know about and so didn’t criticize; for the record, I find it intriguing. He also advocates the special kind of “minor literature” defined by Gilles Deleuze and Félix Guattari in Kafka: Toward a Minor Literature. He defends Blatny’s “sharp turns” as “cuts” in the cinematic sense, citing Sergei Eisenstein‘s montage technique as an example, with theoretical underpinning provided by Susan McCabe in her book Cinematic Modernism: Modern Poetry and Film. Finally, he praises Blatny’s unicorn “as something akin to ‘camp.’ That is the appropriation of mass-produced kitsch to create a kind of art that is not so easily invested in heroic authenticity (Major Art, Macho Pollock etc), but a kind of inauthentic or minor authenticity. I think the unicorn functions in a similar way: but here not an emblem of the inauthenticity/perversion of the homosexual, but of the foreigner, another figure who is repeatedly conceived as a fake/perversion.”

Now, I’ve seen most of Eisenstein’s films and understand montage quite well. There are poems I love that make use of montage. I doubt, though, that Eisenstein would ever have put forward a single montage sequence as a finished film (he had no interest in ephemerality), and when montage is effective in poems (in my estimation), it works within a unifying context.

As for the rest, the only observation I want to make (since I haven’t read Deleuze and Guattari or Susan McCabe) is that Göransson feels compelled to rely on theories to confer a “greatness” value on the poem. From my point of view, there is no difference between this kind of valuation, which avant-garde writers seem to require, and the Social Realist valuation that elevated literary mediocrities while geniuses like Mandelstam perished in prison, or the High Modernist valuation that welcomed Eliot and Lowell into the Canon while generally ignoring Williams and Olson.

Finally, I want to go back to my main points: I don’t think the Blatny poem is “great” and I wouldn’t buy the book based on this poem. I think those are fairly limited assertions, and I don’t understand why Göransson experienced them as a dismissal of Blatny as a poet or Göransson himself as a reader. I would say the same thing about “The Red Wheelbarrow” if it were put forward as a “great” poem and a reason to read Williams; I consider Williams a great poet, but certainly don’t see greatness in that poem.

In the past, Göransson on his blog has defended plurality and the notion that there is no need for us all to agree on a single aesthetic. And yet he takes personal offense when someone disagrees with his aesthetic. I just don’t get it.

_________________
*You can find this extraordinary photo of Blatny here, a page promoting an exhibition at the Montanelli Gallery in the Czech Republic. Appropriately enough, the gallery is located on Neruda Street—doubtless named after Jan Neruda, the Czech poet whose name the Chilean poet Neftalí Ricardo Reyes Basoalto borrowed for his nom de plume, “Pablo Neruda“.