Free in the Open

Browse: Home » Free in the Open

Free in the Open 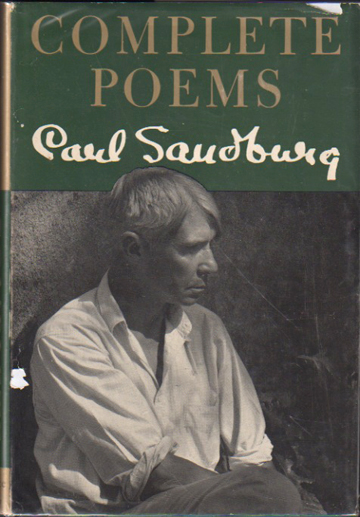 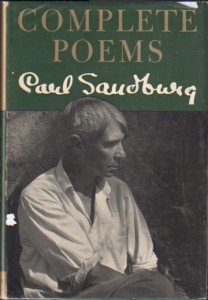 I discovered this lovely, if slightly battered copy of Carl Sandburg‘s Complete Poems (not the Revised and Expanded edition linked here) at The Broadway Book Mall for a mere 9 bucks. I have great affection for Sandburg, even though poetry about thinking about theories about language has made Sandburgesque poets verboten at the regatta. I first read him in high school, in Laurence Perrine’s Sound and Sense (OMG, now in it’s 8th edition). The poem, as I recall, was the first I’m quoting below, from Chicago Poems, published in 1916. The second poem below is from the “New Section” of his Complete, which means the poem was written sometime in 1940s.

Passing through huddled and ugly walls
By doorways where women
Looked from their hunger-deep eyes,
haunted with shadows of hunger-hands,
Out from the huddled and ugly walls,
I came sudden, at the city’s edge,
On a blue burst of lake,
Long lake waves breaking under the sun
On a spray-flung curve of shore;
And a fluttering storm of gulls,
Masses of great grey wings
And flying white bellies
Veering and wheeling free in the open.

Worms and the Wind

Worms would rather be worms.
Ask a worm and he says, “Who knows what a worm knows?”
Worms go down and up and over and under.
Worms like tunnels.
When worms talk they talk about the worm world.
Worms like it in the dark.
Neither the sun nor the moon interests a worm.
Zigzag worms hate circle worms.
Curve worms never trust square worms.
Worms know what worms want.
Slide worms are suspicious of crawl worms.
One worm asks another, “How does your belly drag today?”
The shape of a crooked worm satisfies a crooked worm.
A straight worm says, “Why not be straight?”
Worms tired of crawling begin to slither.
Long worms slither farther than short worms.
Middle-sized worms say, “It is nice to be neither long nor short.”
Old worms teach young worms to say, “Don’t be sorry for me unless you have been a worm
and lived in worm places and read worm books.”
When worms go to war they dig in, come out and fight, dig in again, come out and fight again, dig
in again, and so on.
Worms underground never hear the wind overground and sometimes they ask, “What is this
wind we hear of?”