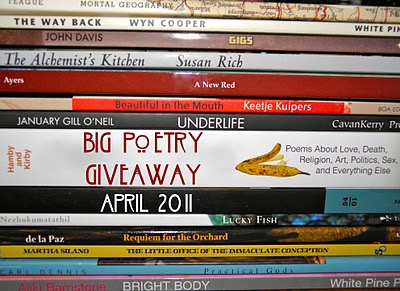 In celebration of National Poetry Month … well, let me set that aside. Much of my income derives from creating promotional campaigns, so I’m more or less immune to this annual public relations event. My participation in this particular event is meant to honor the generous initiative cooked up by Kelly Russell Agodon more than it is to promote poetry in general. (Is there such as thing as “poetry in general”?) It also gives me an excuse to share some of my favorite poetry—and some of my own, which is not the same thing—with two lucky Perpetual Birders.

Here’s how it’ll work. Simply comment on this post by April 30, 2011 at midnight PST and include the phrase “free poetry” so I know you’re not some kind of Internet robot or a member of the Bök/Goldsmith gang—which amounts to the same thing. Then, on May 1st or 2nd, I’ll randomly select two winners from among the commenters. (Common taters?) Each winner will get two books: one by a world-class poet and one by me; the aim, my therapist says, is to display my work in the worst possible light … something about my childhood, which I can’t recall at the moment….

Here are the two Big Leaguers up for grabs:

Here is a sampling from each book. First, two by A. R. Ammons:

Dispossess me of belief:
between life and me obtrude
no symbolic forms:

grant me no mission: let my
mystical talents be beasts
in dark trees: thin the wire

I limp in space, melt it
with quick heat, let me walk
or fall alone: fail

me in all comforts:
hide renown behind the tomb:
withdraw beyond all reach of faith:

leave me this black rich country,
uncertainty, labor fear: do not
steal the rewards of my mortality.

Conserving the Magnitude of Uselessness

Spits of glitter in lowgrade ore,
precious stones too poorly surrounded for harvest,
to all things not worth the work
of having,

brush oak on a sharp slope, for example,
the balk tonnage of woods-lodged boulders,
the irreparable desert,
drowned river mouths, most shores where

the winged and light-foted go,
take creosote bush that possesses
ground nothing else will have,
to all things and for all things

crusty or billowy with indifference,
for example, incalculable, irremovable water
or fluvio-glacial deposits
larch or dwarf aspen in the least breeze sometimes shiver in—

suddenly the salvation of waste betides,
the peerlessly unsettle seas that shape the continents,
take the gales wasting and in waste over
Antarctica and the sundry high shoals of ice,

probably,
rank as weeds themselves and just as abandoned:
nothing useful is of lasting value:
dry wind only is still talking among the oldest stones.

Next, two by Cesare Pavese:

The hill is part of night, the sky is clear.
They frame your head, which scarcely moves,
moving with that sky. You are like a cloud
glimpsed between the branches. In your eyes there shines
the strangeness of a sky which isn’t yours.

The hill with its earth and leaves contains
in its black mass your living look.
The curve of your mouth is like a gentle dip
between the distant slopes. you seem to play at being
the great hill and the clarity of the sky:
to please me you repeat the ancient setting,
you make it purer.

But you live somewhere else.
Your tender blood was made in some other place.
The words you speak have no echo here
in the harsh desolation of this sky.
You are just a wandering cloud, white and very sweet,
tangled one night among these ancient branches.

The mornings run their course, bright and deserted
along the river’s banks, which at dawn turn foggy,
darkening their green, while they wait for the sun.
In the last house, still damp, at the field’s edge,
they sell tobacco, which is blackish in color
and tastes of sugar: it gives off a bluish haze.
They have grappa there too, the color of water.

There comes a moment when everything stands still
and ripens. The trees in the distance are quite,
their darkness deepens, concealing fruit so ripe
it would drop at a touch. The scattered clouds
are swollen and ripe. Far away, in city streets,
every house is mellowing in the mild air.

This early, you see only women. The women don’t smoke,
or drink. All they can do is stand in the sunlight,
letting it warm their bodies, as if they were fruit.
The air, raw with fog, has to be swallowed in sips,
like grappa. Everything here distills its own fragrance,
steeping them to their depths in the soft air. The streets
are like women. They ripen standing still.

This is the time when every man should stand
still in the street and see how everything ripens.
There’s even a breeze, which doesn’t move the clouds
but somehow succeeds in maneuvering the bluish haze
without scattering it. The smell drifting by is a new smell,
the tobacco is tinged with grappa. So it seems
the women aren’t the only ones to enjoy the morning.

Let me add that the books of mine that will accompany these are top secret. Whee!