After the First Man

Browse: Home » After the First Man

After the First Man 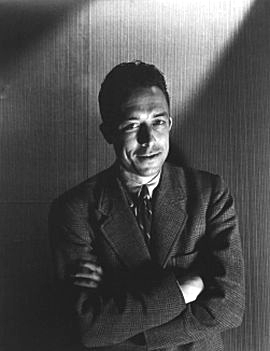 There’s nothing better than an unfinished book by a great writer to teach us about the struggle for clarity and coherence that lies at the heart of the creative process. Albert Camus‘s novel The First Man is a case in point. We see Camus wrestling with autobiographical material so intimate, so charged with distress and lyricism, that he sometimes can’t seem to keep up with the rush of memory and emotion; and yet the measured, humane intelligence be brought to all his work is there, and as a result the writing is already (in the handwritten manuscript found in the wreckage of the car in which he was killed) layered, subtle, brash, hard-edged, and tender by turns. (Camus grew up as a member of the French colonial minority in Algeria, with a widowed, deaf and illiterate mother, in a house ruled by hgis equally illiterate grandmother, in spirit-crushing poverty. Only the recognition of his intelligence by a compassionate school teacher saved him from the truly wretched life that otherwise lay in his future.) Here are a few excerpts:

[P]oor people’s memory is less nourished than that of the rich; it has fewer landmarks in space because they seldom leave the place where they live, and fewer reference points in time throughout lives that are gray and featureless. Of course there is the memory of the heart that they say is the surest kind, but the heart wears out with sorrow and labor, it forgets sooner under the weight of fatigue. Remembrance of things past is just for the rich. For the poor it only marks the faint traces on the path to death. And besides, in order to bear up well one must not remember too much, but rather stick close to the passing day….

Then came class. With M. Bernard, this class was always interesting for the simple reason that he loved his work with a passion. Outside, the sun might blare on the tawny walls while the heat crackled in the classroom itself, though it was shaded by awnings with big yellow and white stripes. Or the rain might fall, as it does in Algeria, in endless deluges, making a wet dark well of the street, but the class was hardly distracted. Only the flies during a storm could sometimes divert the children’s attention. They would be captured and grounded in the inkwells, where they suffered a hideous death, drowned in the purple ink that filled the little cone-shaped wells that were set in holes in the table. But M. Bernard’s method, which consisted of strict control on behavior while at the same time making his teaching lively and entertaining, would win out over even the flies. He always knew the right moment to bring from his treasure chest the mineral collection, the herbarium, the mounted butterflies and insects, the maps or … to revive his pupils’ flagging interest. He was the only person in the school to have obtained a magic lantern, and twice a month he would do projections on some subject in natural history or geography. In arithmetic, he instituted a contest in mental calculation that forced the students to think quickly. He would put forth a problem to the class, all sitting with their arms folded, in division, or multiplication, or sometimes a somewhat complex addition. How much is 1,267 + 691? The first one to give the correct answer was awarded a plus that counted toward the monthly ranking. Besides, he used the textbooks with competence and accuracy…. The texts were always those used in France. And these children, who knew only the sirocco, the dust, the short torrential cloudbursts, the sand of the beaches, and the sea in flames under the sun. would assiduously read–accenting the commas and periods–stories that to them were mythical, where children in hoods and mufflers, their feet in wooden shoes, would come home dragging bundles of sticks along snowy paths until they saw the snow-covered roof of the house where the smoking chimney told them the pea soup was cooking in the hearth. For Jacques, these stories were as exotic as they could possibly be. He dreamed about them, filled his compositions with descriptions of a world he had never seen, and was forever questions his grandmother about a snowfall lasting one hour that had taken place in the Algiers area twenty years earlier. For him these stories were part of the powerful poetry of school, which was nourished also by the smell of varnished rulers and pen cases; the delicious taste of the strap on his satchel that he would chew on at length while laboring over his lessons; the sharp bitter smell of purple ink, especially when his turn came to fill the inkwells from a huge dark bottle with a cork through which a bent glass tube had been pushed, and Jacques would happily sniff the opening of the tube; the soft feel of the smooth glossy pages in certain books, which also gave off the good smell of print and glue; and, finally, on rainy days, the smell of wet wool that emanated from the wool coats at the back of the classroom and seemed to a harbinger of that Garden of Eden where children in wooden shoes and woolen hoods ran through the snow to their warm homes.
Only school gave Jacques and Pierre these joys. And no doubt what they so passionately loved in school was that they were not at home, where want and ignorance made life harder and more bleak, as if closed in on itself; poverty is a fortress without drawbridges.

Most of the books in the library were novels, but many were set aside and forbidden to those under fifteen. And the children’s strictly intuitive method made no real selection among the books that remained. But chance is not the worst method in matters of culture, and, devouring everything indiscriminately, the two gluttons swallowed the best at the same time as the worst, not caring in any event whether they remembered anything. and in fact retaining just about nothing, except a strange and powerful emotion that, over the weeks, the months, and the years, would give birth to and nurture a whole universe of images and memories that never yielded to the reality of their daily lives, and that surely was no less immediate to these eager children who lived their dreams as intensely as they did their lives.

Unemployment, for which there was no insurance at all, was the calamity they most dreaded. That explained why these workers, in Pierre’s home as in Jacques’s, who in their daily lives were the most tolerant of men, were always xenophobes on labor issues, accusing in turn the Italians, the Spaniards, the Jews, the Arabs, and finally the whole world for stealing their work–an attitude that is certainly disconcerting to those intellectuals who theorize about the proletariat, and yet very human and surely excusable. It was not for mastery of the earth or the privileges of wealth and leisure that these unexpected nationalists were contending against other nationalities; it was for the privilege of servitude.

I’ve written about Camus before on this blog, and I’ve toyed with the notion of doing something more extensive; but Hayden Carruth did everything I would want to do–and more–in his philosophical novel After the Stranger: Imaginary Dialogues with Camus, so maybe I’ll simply recommend that interested Perpetual Birders track down Carruth’s (sadly) out-of-print minor masterpiece.