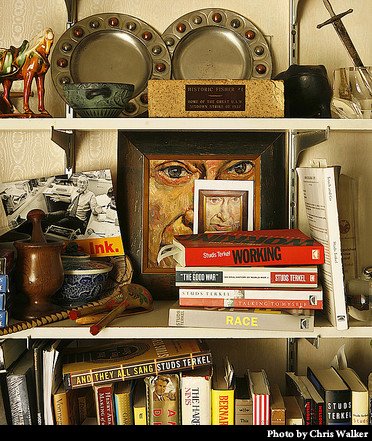 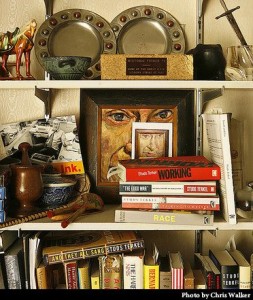 I’m saddened by the passing of Studs Terkel, whose in-depth truth-telling journalism stands up so well to the mental bon-bons that come to us so nicely wrapped in multicolored cellophane by the Corporate media.

And it’s interesting to contemplate the passion Terkel brought to understanding America and Americans, especially in comparison with the increasing dispassion and outright disinterest most American poets have brought to that effort over the past 30 years or so. There are many exceptions, of course, but in general the rise of Ashberyism—its drifty obliquity, hyper-cleverness and slightness of purpose—has left us with a poetry that tells us next to nothing about the facts we find in Terkel’s books. Although it’s probable, as Robert Archambeau argues in the latest issue of Poetry, that most American poets are politically on the left, their poetry is very often pure Reaganism: long on ideology but short on reality, a faith-based intellectual exercise that expects significance to “trickle down” from various theoretical commitments—or that disputes the very idea of “significance” in order to justify its insularity and lack of an audience. It’s this weird intellectualoid Reaganism we hear, for example, in this conversation between critic Marjorie Perloff and poet-professor David Wojahn centering on Robert Lowell’s Collected Poems. How cleverly they skewer Lowell, sneer at Sharon Olds, condescend to Adrienne Rich, and toss around intellectualoid tags like “discourse radius.” The point? Their noses are out of joint over Lowell’s daring to write about his own life as if it had a larger significance.

Studs Terkel, of course, saw all lives as having a larger significance. One did not have to be a Lowell, or a Yale Younger Poet like Wojahn, or a Ph.D’d critic like Perloff to deserve being heard. If one truth could be said to have animated Terkel’s life and work, it’s the notion that no one is really ordinary. It would be heartening if American poetry could rediscover that truth.

UPDATE: Three appreciations of Studs Terkel and his work, here, here and here.