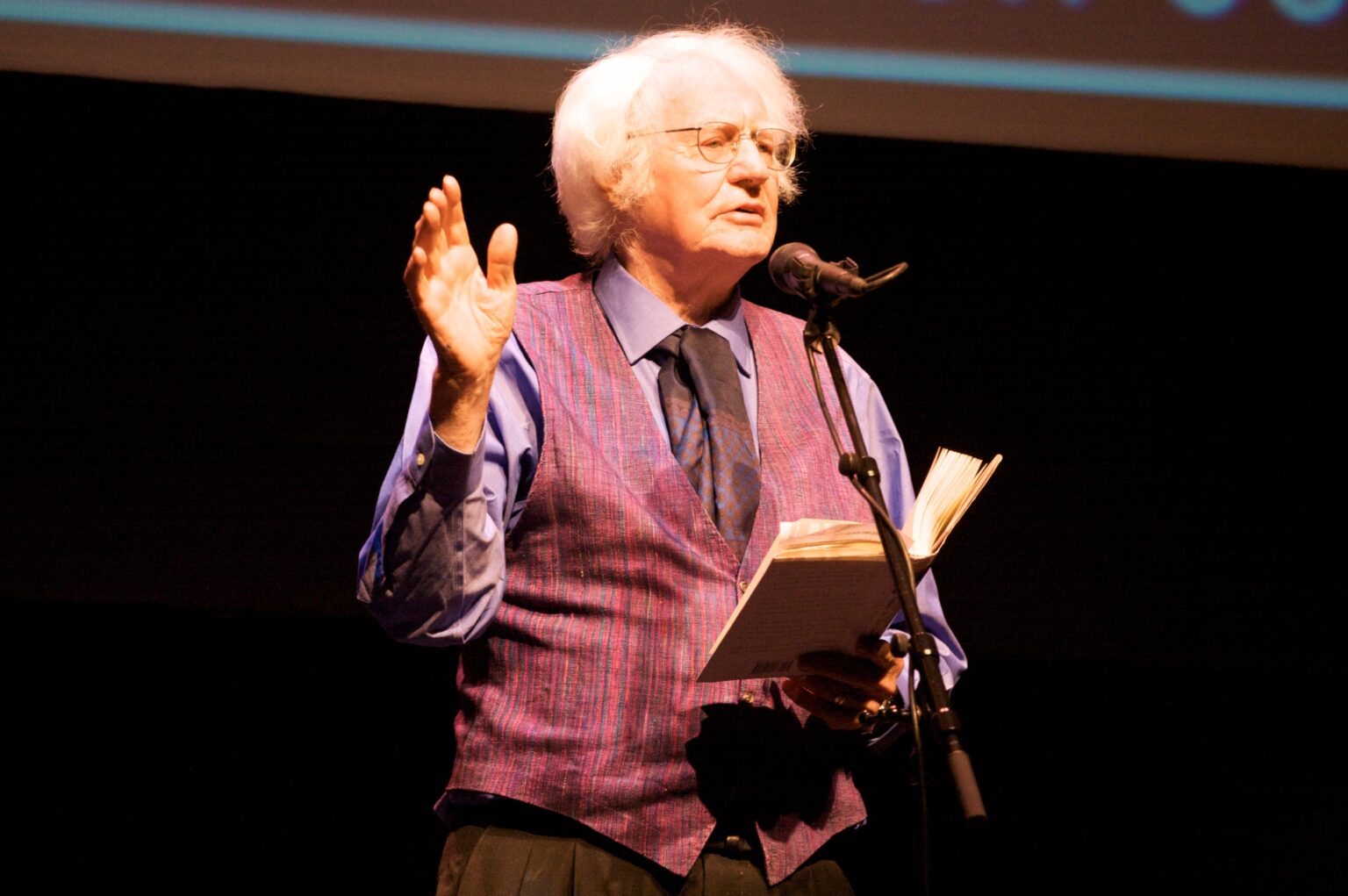 Poetry Out Loud Minnesota Finals at the FItzgerald Theater. Desdemona was the MC, and Robert Bly (Minnesota Poet Laureate) read several of his poems at the end. Two of the 18 competitors were from Morris and both made it to the last round of 6; Alex McIntosh placed 4th and Thomas McPhee placed 6th. Nic McPhee, CC BY-SA 2.0 <https://creativecommons.org/licenses/by-sa/2.0>, via Wikimedia Commons

It’s startling to think of Robert Bly moving on, leaving us here without his energy, his restlessness, his exemplary dedication to opening a path toward a different way of imagining the purpose of poetry.

Dana Gioia famously asked, “Can poetry matter?” Bly showed that it could matter … that poetry provided a way into the reaches of spiritual life that had been hidden away from us by America’s utilitarian values. My friend and fellow poet, Bill Tremblay,  tells the story of approaching Bly at a conference of some kind and saying, “Without you there would be no American poetry as we know it.” How true! Robert Bly didn’t accomplish that entirely on his own, of course, but his genius was central to the effort.

Bly opened up the possibility for me of being a poet and dedicating the majority of my writing life to that endeavor. He was, in fact, the first living poet I ever saw in person—and what an experience that was! (I wrote about it in some detail back in 2009.) I had come to poetry in high school through Laurence Perrine’s textbook Sound and Sense, and it was for me very much a “head” experience; analysis first, then feeling. Bly’s performance pushed analysis to the side and brought feeling into the foreground. Feeling first, then analysis; the experience first, then the interpretation. Bly changed the way I read poetry and the way I wrote poetry, and he did so not just through his own poems but through his translations, which in itself helped to break the stranglehold of necktied, smug 1950s verse. (We’ve moved on to another kind of smugness, but ain’t that the American way?)

Here are some of the obits for Robert Bly, most of them skewed toward often skewed considerations of the Men’s Movement and Iron John:

It will take a remembrance by someone who understands the full range of Bly’s importance to American literary culture to provide a genuine sense of his achievement. In the meantime, here is the most capacious source I know of on Bly and his work: Robert Bly in This World: Proceedings of a Conference Held at Elmer L. Andersen Library, University of Minnesota, April 16-19, 2009, edited by James Lenfestey and Thomas R. Smith.