A sad day in more ways than one.

First, President Obama’s powerful speech at the vigil for the victims of the Sandy Hook Elementary School shootings. 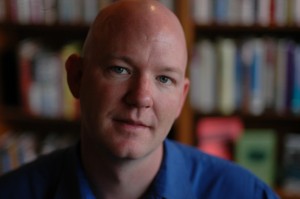 And then tonight the news that Jake Adam York passed away today from a massive stroke. Jake was just 40, a fine poet with three full-length books to his credit: Murder Ballads, A Murmuration of Starlings, and Persons Unknown. Each book evolved seamlessly from the one that went before. He was going from strength to strength, which many poets do not, and I always looked forward to reading his newest work. In fact, I recently put up a congratulatory post on his receiving a 2013 NEA Literature Fellowship.

I’ll say goodbye to Jake with one of my favorite of his poems, from his first book, Murder Ballads. I heard him read it at Denver’s Cameron Church when the book first came out, and we met for the first time at the reception after. Jake was a true poet and a true gentleman.

Not even a father yet
my grandfather leans against
the grille of his ‘46 Packard,
new chrome blinding

even in black-and-white.
His white slacks billow
like a skirt in the wind.
His hair is perfectly still.

The war is behind him.
The road winds up from the farm.
One cornhusk hand
slips from the fender

and into the fingers
that ghost his fingers,
the thin, delicate lace
that haunts his hems.

The more I look, the more
he looks like someone else,
ringlets massing in his hair,
the gaze gone strangely tender,

the smile now doubly bright—
bright as the rings on his finger
casting what they cannot hold,
as if ready to part, to say

what’s hidden’s never hid
but beating like a second heart,
a second pulse in the pulse
that runs through everything.