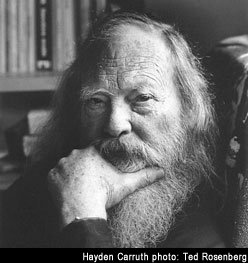 I have been asked more than once recently what book I would want with me if I were stranded on a desert island. (People who ask this forget the key word “desert,” which—if we took it seriously—would dictate something far too slender.) The complete works of William Blake was one of my answers. But today I have to revise that choice. It would have to be the complete works of Hayden Carruth, who died last night at age 87.

I discovered Carruth’s poetry through his prose. The year was 1969, and I was engaged in what would become a lifelong interest in Albert Camus. It happened that a bookstore down the street from where I worked was having a sale, and on a sale table I picked up Carruth’s brilliant After the Stranger: Imaginary Dialogues with Camus. The book is nominally a novel, but is really a work of critical philosophy—and by “critical,” I mean it deals with philosophical issues that are critical to one’s survival as a feeling and thinking creature. (Not, that is, the prissy brain-surgeon parsings that pass for philosophy among fans of Wittgenstein.) Carruth enacted Camus’ ideas, and even now his book is the first I would recommend to any prospective Camus devotee.

After the Stranger took the top of my head off, and looking for more of that feeling I started hunting down everything I could find by Hayden Carruth. There wasn’t much at the time: another powerful novel, Appendix A, and one book of poems: For You. (I wouldn’t be able to find a copy of The Crow and the Heart for a few years yet—these events having taken place long before the advent of online bookselling.) More than any poet since I’d first read Yeats, Carruth’s artful and crafty experimentations with form bowled me over, ranging from imagistic gems …

… to these masterful quatrains hammered out as an introduction to “My Father’s Face,” a long poem written in memory of his father:

Old he was but not yet wax,
old and old but not yet gray.
What an awkwardness of facts
gray and waxen when he lay.

Rage had held me forty years,
only five have sought his grace.
Will my disproportionate tears
quell at last his smiling face?

Awkwardly at his behest
I this queer rhyme try to make
after one that he loved best,
made long since by Willy Blake.

But more than formal adventurousness, it was Carruth’s bedrock humanity that moved me. He took the world seriously, but himself … not so much—except as one instance of a quixotic life led in the serious world. This seemingly contradictory attitude gave his work a refreshing humility and earthy humor that I didn’t find in other poets of Carruth’s immediate cohort — Howard Nemerov, Denise Levertov, Louis Simpson, and Jane Cooper. Carruth’s attitude, his formal mastery, and his urge to experiment with both form and content spoke to me, as they say — and help to shape my personal aspirations as a poet.

Luckily, Copper Canyon Press has made the majority of Carruth’s poetry available in Collected Longer Poems and Collected Shorter Poems, 1946-1991, along with some his best prose collections.

In the end, I have to admit that I still admire Blake like nobody’s business; but I’d say goodbye to that glorious loon and all of his angels if it meant continuing to have Carruth’s atheistic, Yankee tough-minded tenderness close at hand to console and inspire me in some island life.