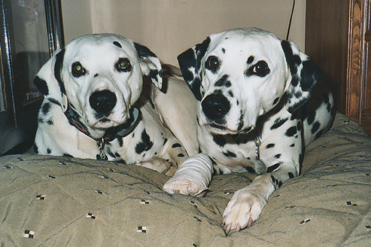 We’ve had to let go of our 12-year-old Dalmatian, the second of two Dals—Mingus and Dizzy (after Charles and Gillespie)—that we rescued 11 years back. Mingus we said adios to three years ago; Dizzy, younger (by how much we don’t know) and more rambunctious, moved on this morning. My wife has written a lovely tribute for Dizzy, which I’ll share here:

Hello all of my animal loving friends!

We are saddened to tell you that today we let our precious Dizzy go “on to the next.” We adopted both of our boys, Dizzy and Mingus, eleven years ago this month from the Rocky Spot Rescue (RSR) in Oklahoma. They were at a pound in Oklahoma City, being led down the hall to be euthanized when the wonderful people at Rocky Spot rescued them and found then matched them up with us. We weren’t quite ready to adopt a dog, let alone two, but when we saw their sweet faces on the internet, we looked at each other and said “how can we not take them both?” Both of them have given us so much joy and we will never forget them. When we adopted them, the staff at RSR estimated they were about 1 and 3. We think Mingus, who has been gone since June 9, 2011 was a little older than three and Dizzy was possibly a little younger than they thought. You just never know for sure when you adopt rescue dogs.

As many of you know, Dizzy has had epilepsy for several years and has started having seizures again, and the after-effects seem to get worse each time. He has been so disoriented and cries constantly and we feet like he has communicated with us in his own way that he was ready to go. He had a T-bone steak for breakfast before the vet came. It is a very sad day, but I want to focus on the great memories and so I’m requesting that you don’t send any cards as they are a reminder of such a sad time. If you are moved to do something, please send $5 or whatever you can afford to The Rocky Spot Rescue in honor of Dizzy & Mingus.

Some of my fondest memories of Dizzy & Mingus:

To those of you who have pets, give them a special hug and pet for us tonight and send positive thoughts to Dizzy as he goes on his journey to be back with his running buddy, Mingus.

As for me, supposedly the “writer” in the family, I’ve written about Dizzy only off and on in my notebook, but nothing has ever “come together” except this haiku:

the dog’s seizure past,
he wanders the house—more lost
being lost at home

I’ve often pondered the disdain heaped on beginning poets who write about their pets, as if these companions aren’t worthy of attention—although I suspect it’s the horror of sentiment that is one of Pound’s most enduring contributions to modern poetry. This horror is particularly advanced in the West; perhaps it’s what allows us to send robot bombs down on tribal populations in the name of freedom and Democracy, or to encourage Wall Street bankers to destroy the economy in order to move even more wealth to the top one percent. In any case, I’ve found that sentiment—as in W. S. Merwin’s dog poems in The Shadow of Sirius—can be profound and authentic.

As for Dizzy and Mingus, letting them go was heartbreaking, but better than seeing them suffer, each in his own way. Since most of you reading this blog have never met them, let me offer up a few photos in lieu of more blather.